The Ministry of Foreign Affairs is today signing a three-year agreement with Save the Children on education in situations of crisis and conflict. 'Support for education in crises and conflicts is more important than ever. In addition to signing this agreement, we are also giving NOK 63 million to Save the Children's education efforts in Syria and Iraq,' said Minister of Foreign Affairs Børge Brende.

Norway is continuing to step up its efforts to promote education for children and young people in areas affected by crisis and conflict. Around 30 million children are denied the opportunity to start school because of war and conflicts. An even greater number of children have their schooling ruined because schools are destroyed, teachers disappear, and teaching resources in conflict-affected areas are scarce. 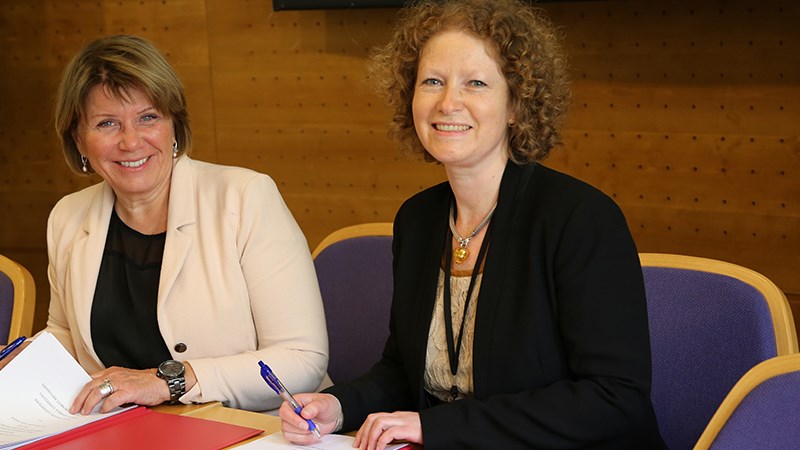 The agreement was signed 27 April by Secretary General in Save the Children, Tove R. Wang, and Assistant Director General in the Ministry of Foreign Affairs, Ingunn Vatne.  Photo: M.B. Haga, MFA

'Save the Children has extensive experience of working to promote education in crises all over the world. Through Save the Children and other partners in the field of education, Norway is helping to secure education for children and young people in situations of crisis. This is important because schooling gives children and young people greater protection in situations of crisis, and ensures that the next generation gains the skills and resources they need to make a positive contribution to the development of their country in the long term,' said Mr Brende.

In Syria and its neighbouring areas alone, 2.8 million Syrian children and young people do not attend school. Norway's support for Save the Children's education efforts in Syria and Iraq is part of its work to follow up the donor conference for Syria, which was held in London in February, on Norway's initiative.

Under the three-year agreement, Save the Children will be given around NOK 14 million annually to build up knowledge and expertise on education in crisis situations. This expertise can then be used in the field, in cooperation with the UN and local partners. One important area covered by the agreement is the work to increase endorsement of – and adherence to – the Safe Schools Declaration. The Declaration was launched in Oslo last year, and seeks to promote the protection of schools and universities from military use and attack in conflict situations.