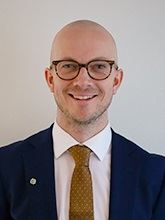 Sandsmark Idsøe holds a master’s degree in comparative politics from the University of Bergen and the Free University of Berlin. He has also completed a programme in national emergency preparedness and crisis management at the Norwegian Police University College.”