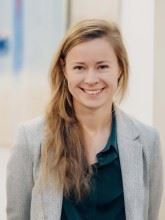 Political adviser at the Ministry of Culture from 18 October 2021.

Malmin was appointed as political adviser to Minister of Culture and Equality Anette Trettebergstuen on 18 October 2021.

Oda Malmin was born in Stavanger in 1987. She joins from her previous role as a communications adviser to the parliamentary Norwegian Labour Party in the Storting, and she has previously worked in the Labour Party’s central office and for the Workers’ Youth League.

Malmin holds a Master’s degree in Nordic Languages and has worked as an editor for the Det Norske Samlaget publishing house. She is also a published novelist, having released two books to date. Malmin has many years’ experience working in the festival industry.