Svalbard Global Seed Vault: The art is in place

When Svalbard Global Seed Vault opens on 26 February, only the entrance section with Dyveke Sanne’s art project will be visible in the landscape. The building consists of three underground halls which have been blasted out of the mountain - a security vault which will hold up to 4.5 million different types of seeds from all over the world. The art will identify the building from a distance, in both daylight and darkness.

Signalling the seed vault’s
The roof and parts of the frontage of the visible entrance section are filled with highly reflective triangles, acid-resistant steel of various sizes. Together with other refractive elements such as dichroic mirror glass and prisms, these will throw the surroundings and the light back in all directions. The building will reflect sunlight and lights, depending on season and time of day. During the polar night, other light sources will take over. The light represents a volume complementary to the dark which has been hollowed out of the permafrost within and will signal the seed vault’s position at all times.

Svalbard Global Seed Vault is a vital measure to secure the world’s food seeds against any negative consequences of war, pollution or climate change. The seeds will be duplicates of seed collections from more than 1,400 gene banks spread over the entire planet. The temperature inside the vault will be kept around minus 18 degrees Celsius.

The artist Dyveke Sanne, who lives in Asker, was educated at the National College of Art and Design and the National Academy of Fine Art. In recent years she has been working on major art commissions for the government and for local authorities. Her work is often based on phenomena like light and shade in a variable reality, often closely linked with architecture and space.

The artist has this to say about the art project:
“The interior of the seed vault is protected against inspection. Even so, its contents reflect a determined significance and a complexity which affects us. The seed vault’s existence reminds us of our own position within the whole and of the state of the earth. The seeds commit to a future. They are copies of a diversity which craves a cyclic repetition of treatment, rather than a steady faith in the selected original and a linear progress.

The mirrored surfaces don’t disclose any objects which may lie behind them - they copy what they receive and throw it back. Stand close enough and you can see yourself in the reflections; stand further off and you become part of the landscape, or simply dazzled by the reflected light. Even so, the reflections form a juxtaposition and displacement which changes with the observer’s point of view.” 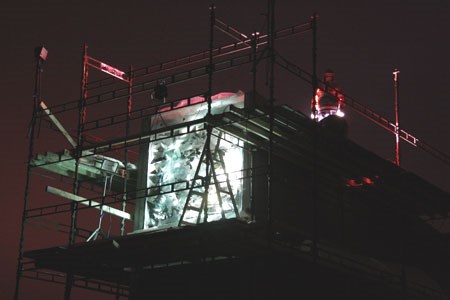 Dyveke Sanne’s intention is to help reflect the idea behind Svalbard Global Seed Vault. If the worst should happen, what it contains could mean life or death for the world’s population. This is a signal building, which says something about the global situation of our time.

The art project has been produced and executed by KORO – the official body for art in public spaces.