On Friday the 22nd of February it was revealed that the US has chosen to suspend flight operations with the F-35 to allow the manufacturer of the engine time to examine a crack in a turbine blade. This was discovered in a single aircraft during a routine inspection on the 19th of February. 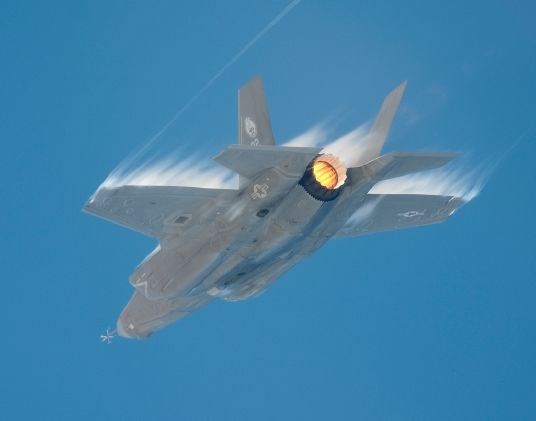 With a thrust of 43,000 lb with afterburner, the engine in the F-35 the most powerful ever to have been installed in a fighter jet. In comparison, the current Norwegian F-16 offers 23000 lb thrust. (Lockheed Martin)

On Friday the 22nd of February the JSF Program Office decided to suspend flight operations with the F-35 to allow the manufacturer of the engine time to examine a crack in a turbine blade. This was discovered in a single aircraft during a routine inspection on the 19th of February.

- There could be several reasons why this happened, such as a manufacturing error on that one turbine blade, but until the program and the manufacturer are absolutely certain, further test and training flights will be postponed. This is normal procedure when these things happen. The goal is to allow the engine manufacturer Pratt & Whitney time to disassemble the turbine blade in question and analyze it thoroughly to determine if they need to make any modifications to the engine, explains Brigadier General Morten Klever, who is the Deputy Program Director for the Norwegian F-35 Program.

The technical development of the F-35 has recently seen significant progress, and the need for changes and retrofits in the aircraft because of defects discovered in testing has proven to be lower than expected.

- This is what happens in a test program - you find things that you then fix to prevent it becoming a problem later on. In this case the inspection and control procedures worked exactly as they should. We had several similar cases with the F-16 as well, even well after they had been delivered to Norway, so there is nothing special in this happening with a newly developed engine. It is of course unfortunate when the test program is forced to stop because of this kind of error, but while doing so it also allows for a lot of resources to be poured into solving the problem. I have great confidence that the engine experts will uncover the cause of the fault and that the aircraft will be back in the air soon, says Brigadier General Klever.

For more information or comments, please contact the Norwegian Ministry of Defence press office at +47 23096011 – email: fdinfo@fd.dep.no or Communications Advisor with the Norwegian F-35 Program Endre Lunde at +4790853270 – email: endre.lunde@fd.dep.no.

- As of February 2013, the manufacturer Lockheed Martin has delivered a total of 58 F-35 to the American, British and Dutch Armed Forces.

- The first four F-35s that are to be used for the training of Norwegian personnel were approved by the Norwegian Parliament in 2011. Of these four, the first two will be delivered in the United States in 2015 and the last two in 2016.