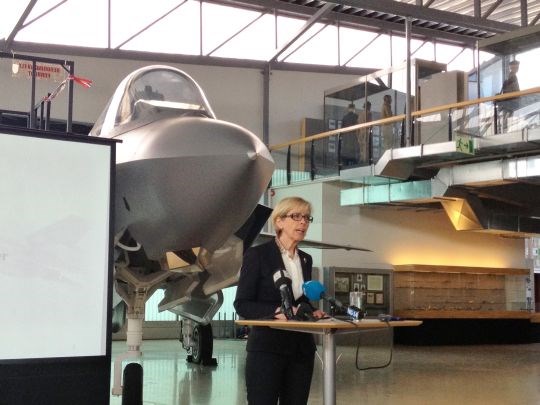 Norwegian Minister of Defence Anne-Grete Strøm-Erichsen announced the Government's intention to procure 6 F-35s in 2017 standing in front of a full-scale mock-up of the F-35 at the Gardermoen Aircraft Collection. (Forsvarsdepartementet)

- We are very pleased that we have gotten to this point in our procurement process. Today represents a major leap forward in our efforts to procure the F-35. By making this commitment we are able to proceed with our plans to replace the F-16 fleet around 2020. By doing so we will also be introducing a wide range of additional capabilities to our armed forces which will improve their ability to meet the challenges of the coming three to four decades, says Norwegian minister of defence, Ms Anne-Grete Strøm-Erichsen.

Together with the authorization for procuring aircraft, the government is also requesting permission to begin procurement of a wide range of additional equipment and services, including integration work, training and simulators.

- When the first aircraft land in Norway in 2017, we need to be ready to begin training and maintenance operations. That means we also need to begin investments in the necessary equipment and capabilities to do so, says Ms Strøm-Erichsen.

The Norwegian government today also announced its revised procurement plan for the F-35, which will see Norway receiving six aircraft annually from 2017 until 2024. This comes in addition to the four aircraft for training purposes that will be delivered in 2015 and 2016, for a total of 52 aircraft.

- It is important to note that even though we are announcing this plan now, the procurement of aircraft is still subject to annual approvals by the Norwegian parliament, says Ms. Strøm-Erichsen.

- We have concluded convincingly that the F-35 is the only aircraft that fulfills our future operational requirements. This continues to be true to this day, and we have no time to lose. Our F-16s remain among the world’s most capable aircraft of their kind, but they are also among the world’s oldest.

- This is important to us mainly from an operational point of view – we need the JSM to fulfill our operational requirements. It is also important from an industrial side, as we believe the sales potential for the missile is significant with several F-35 users, says Ms. Strøm-Erichsen.

The requests sent to parliament have a total value of NOK 12.9 billion/USD 2.18 billion. This includes both aircraft procurement as well as related investments such as integration work, training and simulators. In addition, the government request calls for an uncertainty allowance of NOK 3 billion/USD 507.2 million.

For more information or comments, please contact the Norwegian Ministry of Defence press office at +47 23096011 – email:  fdinfo@fd.dep.no or Communications Advisor with the Norwegian F-35 Program Endre Lunde at +4790853270 – email:  endre.lunde@fd.dep.no

- The first four F-35s that are to be used for the training of Norwegian personnel were approved by the Norwegian Parliament in 2011. Of these four, the first two will be delivered in the United States in 2015 and the last two in 2016.