- At the NATO Ministerial Council meeting earlier this month I called for including 1325 in NATO’s concept of operation. We obviously have a job to do, to make the military men take this seriously, said Minister of Defence, Grete Faremo.

Speech by Minister of Defence, Grete Faremo, at the UN Security Council, October 26 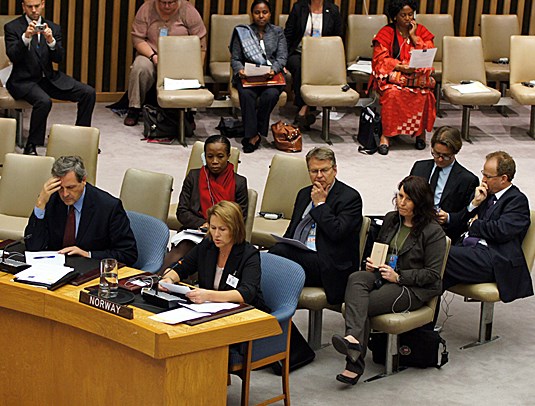 Ten years ago atrocities in Somalia, Rwanda and the former Yugoslavia made even the hardliners soft – at least softer.  For the first time, they let this Council discuss and agree on key questions for sustainable peace:

At least on paper, this resolution gives women a voice, and better protection.

Mr. President, I thank you and the Council for convening this open ministerial meeting – to remind us all what a long way we still have to go, to make the good intentions of Resolution 1325 a reality.

Ten years after the adoption of 1325 - at the NATO Ministerial Council meeting earlier this month - I called for including 1325 in NATO’s concept of operation.  We obviously have a job to do, to make the military men take this seriously.

As Minister of Defence, I note that all of the UN force commanders are men. It is high time to rectify this. I call on the UN to start searching for women commanders while we continue to improve the gender ratio of our forces.

We must get better at explaining that 1325 is not about political correctness.  Better protection and more equal participation of women in social, economic and political life – including in peace processes and security services – improves the quality of the process and the service, making the results more sustainable.  We simply can’t afford to ignore half of society’s talent and capacity.

And, we must ensure greater accountability.  I call on the Security Council to show leadership, by maintaining its focus on full implementation of all resolutions on women, peace and security; by endorsing today the indicators proposed by the Secretary General for this purpose; and by making prosecution of perpetrators a political priority!

To achieve this we must provide the UN system with resources, including finance, to follow up on the ground.  I welcome the establishment of UN Women.  I congratulate its first Executive Director, Under-Secretary-General Michelle Bachelet – and I trust that you will monitor and support Member States and the UN System, to ensure full implementation of all the resolutions on women, peace and security.

For Norway’s own sake, beyond what we have already done, I hereby announce that we immediately take on the following commitments:

The Norwegian government will immediately provide one million US dollars to this project. Mr. President, Norway supports the women, peace and security agenda because we know it is the only way to sustainable peace and to free millions of women and children from the appalling suffering we see in too many current conflicts. The suffering and humiliation is a scar on humanity’s face. We cannot tolerate this.