The Government’s ambition is to pursue a policy based on sound, long-term management of Norway’s petroleum wealth. Our job is to ensure that this wealth can benefit all generations, said State Secretary Hilde Singsaas. 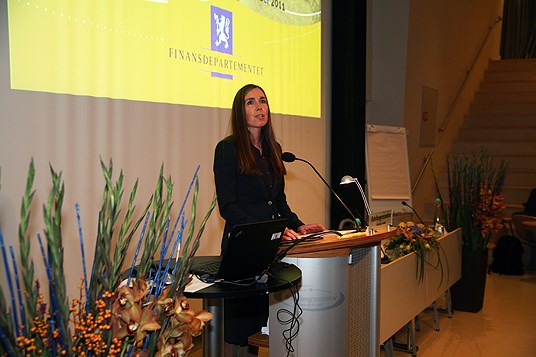 Members of the Strategy Council, distinguished panellists, ladies and gentlemen,

Welcome to the Investment Strategy Summit 2011.

The purpose of this summit is to discuss the further development of the investment strategy for the Government Pension Fund Global.

First, let me thank the members of the Strategy Council for their help in organising this event, and for making sure that we have interesting topics on the agenda and a panel of distinguished speakers.

I would also like to thank you all for coming. It is important that you are here. The broad background represented in the audience tells me that there is a strong interest in how we manange our mutual savings. Engaged stakeholders is a precondition for a well informed debate about the Fund.

The Government’s ambition is to pursue a policy based on sound, long-term management of Norway’s petroleum wealth. Our job is to ensure that this wealth can benefit all generations.

The first transfer to the Fund was made in 1996. One important experience over the last 15 years has been the importance of a well-anchored investment strategy.

The burst of the dot-com bubble in the early 2000 and the financial crisis in 2008 were followed by sharp subsequent recoveries. If the risk level of the Fund had been reduced in 2002 or 2009, the recovery during the upturns would not have been as strong.

An important reason why we can handle substantial short term fluctuations, is the fact that the invesment strategy has been anchored in Parliament, and that there is broad political support for the main aspects of the strategy.

Even though the reported losses in 2008 amounted to 85 billion Euros – almost a total state budget that year - there was a broad majority in parliament supporting the strategy and the ongoing increase in the equity portion. Two years later we had already regained the losses.

Thus, it is important to recognise that markets fluctuate widely from time to time. The Government Pension Fund has a high capacity to absorb such fluctuations and we are not forced to sell today or tomorrow due to short-term fluctuations.

Furthermore, the manager Norges Bank has considerable freedom in the management of the Fund, within the overarching guidelines an risk limits set by the Minsty. This flexibility has already been used to change the composition of the Fund’s portfolio of government bonds.

Today, we would like to turn the discussion slightly away from the day-to-day headlines in the financial press. Instead, we would like to focus on the longer-term aspects, which after all characterize this Fund.

The chosen investment strategy for the Pension Fund is based on a clear financial goal of maximizing real returns at a moderate level of risk. The strategy is expressed in terms of a benchmark to the manager, Norges Bank.

Our current strategy is based on 60 pct. invested in equities and 40 pct. in bonds. Over time, 5 pct. of the Fund will be invested in Real Estate, reducing the bond portfolio to 35 pct.

There has been a gradual evolvement in the investment strategy for the Fund since inception. The Ministry is constantly looking for ways to improve the trade-off between return and risk. We do this by further spreading the investments. We also aim to continue to build on the Fund’s special characteristics, such as its size and its long-term investment horizon.

We expect the Fund to double its current size over the next ten years. The Fund’s strong growth and large size alone comprise an important starting point for the further development of the Fund’s management.

In the report on the management of the Fund presented to the Parliament in April,  we said that the geographical distribution of the Fund and the long-term strategy for the fixed income portfolio are among key issues going forward.

Our preliminarly assessment in the report was that the current concentration on European investments seems less warranted than before. Over time, therefore, the proportion of the Fund that is invested in Europe should be reduced in favour of greater proportions in the rest of the world. In the latest report we also discussed the role for investments in fixed income in a portfolio such as ours. On the one hand, fixed income investments may contribute to diversification. On the other hand, it could be a way to enhance returns over time through collection of various long-term risk premia.

We are now working dedicated to follow-up advice that we have received on these issues from Norges bank, the Strategy Council and different experts. Finding good and robust solutions is an important part of this work.

The Government has very high ambitions for the Government Pension Fund, namely that it should be the best managed fund in the world. This entails identifying leading international practice in all parts of the Fund management and striving to achieve this ourselves.

The Strategy Council plays an important role in this respect by giving expert based advice to the work we do in the Minstry on the investment strategy.

In 2010, we asked the Strategy Council to write a report giving an overview of strategic challenges for the Fund on the aggregate level. The report was presented in November last year, and the Strategy Council proposed a number of potential modifications to the strategy such as accepting higher risk and expanding exposure to more illiquid assets. The Council also recommended reviewing the regional weights in the Fund’s benchmark and tilting the Fund towards value strategies. As I mentioned, these are issues which the Minstry are currently working on. We will get back to some of these issues in our next white paper to Parliament. Other topics will be addressed in later reports.

This year, we have asked the Council to arrange a seminar focusing on issues that are relevant for the further development of the strategy over the coming 5-10 years.

I think the Council has done a very good job in identifying interesting areas for the Fund; First the issue of emerging market investments and whether there exists a risk premium associated with such investments. This is also a key topic in our work on the regional allocation of the Fund. Furthermore, the issue of harvesting liquidity premia, which squares nicely with our work on the fixed income portfolio where we seek to clarify the different roles that risk factors should play in the bond portfolio. Finally, the issue of time time-varying risk premia. A key question in the development of the Fund’s strategy will be whether that time-variation can be captured, and how that may be organised in a fund like ours..

We hope that addressing these more long term strategic issues will trigger an open and engaged debate about the Fund going forward.

This does not nessecarly mean that the Minstry share all the views of the Council, or the other contributors here today, but it underlines the importance the Ministry attaches to independent and critical advice.

I look forward to the presentations and a fruitful discussion.

Thank you again for taking the time to participate at this seminar.

I will now give the word to professor Elroy Dimson.

His research, writing and consulting blends the themes of long term financial market performance and endowment asset management. He is director and Past-president of the Europen Finance Association, and is a member of the advisory boards of the CFA Institute, FTSE Group, and Russel investments. Professor Dimson chairs the Ministry of Finance’s Strategy Council for the Government Pension Fund Global.

Elroy Dimson, the floor is yours.