On Thursday 11 October, Russia and Norway signed a bilateral fisheries agreement for 2013 in Trondheim. The Agreement includes a historically high cod quota for the Barents Sea of 1 million tonnes.

On Thursday 11 October, Russia and Norway signed a bilateral fisheries agreement for 2013 in Trondheim. The Agreement includes a historically high cod quota for the Barents Sea of 1 million tonnes.

"The cod stock in the Barents Sea is in a fantastic condition now, and I am thrilled about the cod quota that the Joint Norwegian–Russian Fisheries Commission has set for 2013. The fact that Norwegian fishermen will be allowed to catch approximately 107,000 tonnes more cod next year than last year will provide increased activity at sea and on land. This means jobs and economic growth in coastal communities," says Lisbeth Berg-Hansen, Norwegian Minister of Fisheries and Coastal Affairs.

The quotas established for 2013 are sustainable and well within the limits following from the scientific advice issued by the International Council for the Exploration of the Sea (ICES).

The total quota for north-east Arctic cod in 2013 has been set at 1,000,000 tonnes. This is an increase of 249,000 tonnes from 2012. As a result of the excellent stock status, the quota is 60,000 tonnes above the advisory quota level calculated on the basis of the joint management strategy previously set by the Joint Norwegian–Russian Fisheries Commission. The total quota for cod is divided between Norway, Russia and third countries in the same proportions as in previous years. Norway's quota for 2013 will be 446,740 tonnes, including 21,000 tonnes of coastal cod and 7,000 tonnes for scientific purposes. 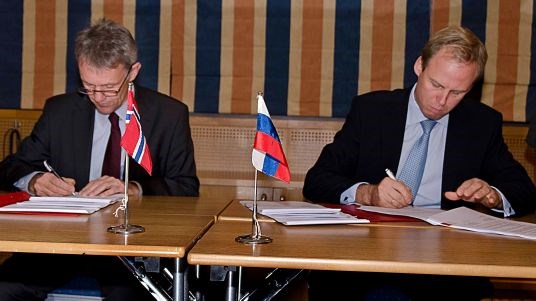 This year's meeting of the Joint Norwegian–Russian Fisheries Commission was held in Trondheim, and the protocol was signed by Arne Røksund, Secretary General of the Ministry of Fisheries and Coastal Affairs, and Vasiliy Sokolov, Deputy Head of the Federal Agency for Fisheries of the Russian Federation.

The Fisheries Agreement also contains technical regulations concerning the exercise of the fishing, inspection measures and research collaboration. There is extensive research collaboration between Norway and Russia on living marine resources and the ecosystem in the Barents Sea, and the parties agreed on the joint Norwegian–Russian research programme for 2013.

"The fisheries cooperation between Norway and Russia is based on mutual trust and willingness to find solutions. This long-standing cooperation aims for forward-looking, sustainable management, based on excellent research collaboration. This is one of the main reasons why Norway and Russia now have the world's largest cod stock," says Berg-Hansen.

"In international terms, the Norwegian–Russian fisheries cooperation is unique. The quota agreement for 2013 has a financial framework of some NOK 15 billion in catch value alone. This provides opportunities for major exports to worldwide markets and increased activity in Norway," adds Berg-Hansen.