Mr Støre commented, “This reflects the progress towards the establishment of an independent Palestinian state that we have seen under the leadership of President Abbas and Prime Minister Salam Fayyad.”

Support for Palestinian institution-builing has been a main priority for the international donor community since the Oslo Accords in 1993. The objective has been to support negotiations on a two-state solution and lay the foundation for the formation of a Palestinian state.

As chair of the Ad Hoc Liaison Committee for Assistance to the Palestinians (AHLC), Norway has a key responsibility for coordinating these efforts. Palestinian insitution-building has seen major progress over the last three years. 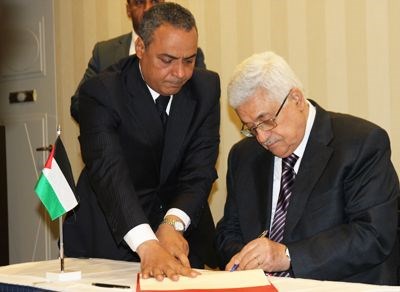 President Abbas signed the agreement in Oslo on July 18. (Marta B. Haga, Utenriksdepartementet)