UN High Commissioner for Refugees António Guterres announced today that Sister Angélique Namaika from DR Congo has been chosen as the winner of the 2013 Nansen Refugee Award.

UN High Commissioner for Refugees António Guterres announced today that Sister Angélique Namaika from DR Congo has been chosen as the winner of the 2013 Nansen Refugee Award.

“Sister Angélique, who has herself been forced to flee, has helped thousands of traumatised women in the DR Congo rebuild their lives. Her example can serve as inspiration for intensified efforts to help the world’s refugees and internally displaced persons,” said Foreign Minister Espen Barth Eide. 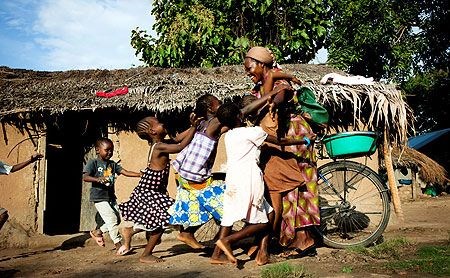 Every day sister Angélique Namaika takes a long trip by bike to visit women who need her help. Here some children give her a warm welcome. (Photo: Anne Ackermann, Norwegian Refugee Council)

Sister Angélique Namaika lives and works in Dungu in the north-eastern region of the Democratic Republic of Congo. Since 2008 she and her organisation, the Centre for Reintegration and Development, have helped young women who have managed to flee from the notorious rebel group the Lord’s Resistance Army (LRA). For many years the LRA waged guerrilla warfare in northern Uganda, but since 2006 their actions have been limited to kidnappings and ambushes in the border regions between Uganda, DR Congo, South Sudan and the Central African Republic.

“On a visit to north-eastern Congo, I had the opportunity to see for myself how women like Sister Angélique create hope in the midst of desperation. I am particularly pleased that I will be able to meet her at the award ceremony in Geneva on 30 September,” said Foreign Minister Eide.

The women Angelique Namaika cares for are severely traumatised, but they receive psychological help and the opportunity to learn a trade. Support is provided for those who want to start their own business. The Centre for Reintegration and Development has gradually expanded and is now able to care for other displaced women in the region as well.

“Lifesaving humanitarian activities are often carried out by local people outside the media spotlight. I hope this award to Sister Angélique will help create a more balanced picture of how humanitarian work is carried out and what local initiatives can achieve,” said Mr Eide.

The Nansen Refugee Award is bestowed by the UNHCR on individuals or organisations that have shown extraordinary and dedicated service to refugees or otherwise advocated their cause. Awarded annually since 1954, this has become one of the most important prizes conferred by the UN. The Nansen Refugee Award is financed jointly by Norway and Switzerland, and the award ceremony is hosted jointly by the UN High Commissioner for Refugees and the Norwegian Refugee Council.