Norway and Tanzania have signed an agreement under which Norway will provide NOK 700 million to Tanzania over a four-year period. This funding will be channelled to a rural energy fund in Tanzania that will give people in rural areas access to electricity.

Norway and Tanzania have signed an agreement under which Norway will provide NOK 700 million to Tanzania over a four-year period. This funding will be channelled to a rural energy fund in Tanzania that will give people in rural areas access to electricity.

“Access to electricity is essential for reducing poverty and generating economic growth. Providing electricity in rural areas is a way of giving the majority of the population in Tanzania the freedom to choose not to use paraffin, diesel and other less reliable energy sources that are damaging to health. Electricity provides light for doing homework and opportunities for creating jobs and generating income, and enables health clinics to function better,” said Minister of International Development Heikki Eidsvoll Holmås.

Mr Holmås and Tanzanian Minister of Energy and Minerals Sospeter Muhongo signed the agreement in Oslo on 9 April. Both of them were taking part in the High Level Meeting on Energy and the Post-2015 Development Agenda. 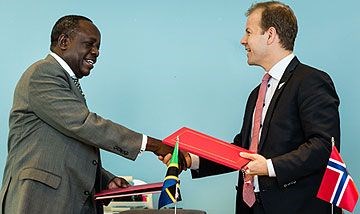 Minister of International Development, Mr. Holmås (right), and Tanzanian Minister of Energy, Mr. Muhongo, with the agreement that will provide the rural people in Tanzania with electric power. (Photo: Thomas Barstad Eckhoff, Gyro)

In Tanzania, eight out of ten people live in rural areas. Of these people, only 6 % have access to modern forms of energy. Increasing access to energy will take many years and will require substantial public subsidies. The rural energy fund is the Tanzanian authorities’ most important tool in this context. The fund will be managed by the Rural Energy Agency (REA). Sweden, the World Bank and the EU are also supporting the fund. Norway will now be the biggest single donor to the fund.

“Increased access to electricity is absolutely essential for ensuring equitable development in Tanzania. Having said this, it is difficult to achieve. Those who use electricity have to pay for it themselves. We will keep a close eye on the quality of individual projects, as well as making sure that necessary reforms are carried out, that the Rural Energy Agency has sufficient capacity and that any threats to sustainability are addressed,” Mr Holmås commented.

So far, more than 90 % of the investments in the fund have gone to expanding the electricity grid, as this is the most effective way of reaching rural areas. But the funds from Norway will also be used for local solutions enabling the production of renewable energy in areas that are not covered by the electricity grid.

Tanzania’s aim is to increase the percentage of the population that has access to electricity from 14.5 % to 30 % on a national basis, and from 6.5 % to 15 % in rural areas, by 2025. In order to achieve this, investments in the rural energy fund will probably need to increase tenfold.

“Tanzania aims to become a middle-income country in the space of 12 years. We will gradually scale down our assistance to the country as this process proceeds. Increased access to electricity is absolutely essential if Tanzania is to achieve its goal. In order to succeed, Tanzanians must think big and improve their systems over and above the individual project level. The agreement between Norway and Tanzania is divided into two phases to ensure that the quality of projects is as intended and that the efforts to bring energy to the rural population progress according to plan,” Mr Holmås said.