In Brunei, Norway acceded to the Treaty of Amity and Cooperation in Southeast Asia (TAC) in a ceremony attended by Norwegian Foreign Minister Espen Barth Eide and the ten ASEAN foreign ministers.

In Brunei today, Norway acceded to the Treaty of Amity and Cooperation in Southeast Asia (TAC) in a ceremony attended by Norwegian Foreign Minister Espen Barth Eide and the ten ASEAN foreign ministers.

Following the signing ceremony, Mr Eide said that "accession to the TAC is a natural extension of our longstanding engagement in the region and our commitment to multilateralism".

“As an outward-looking trading nation, globally engaged in maritime issues, energy and climate, as well as a major investor, Norway already has a significant presence in Southeast Asia”, said Mr Eide. 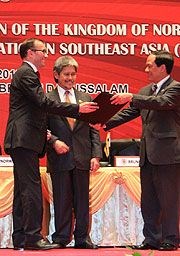 Yet further engagement with ASEAN was needed in view of global trends:

“In today’s interconnected world, regional organizations are proving their relevance. The building of norms and values, peaceful settlement of disputes and the promotion of economic integration are increasingly taking place at the regional level. Hence, contact between as well as within regions is important  to understand and influence the global agenda”, Eide said.

Mr Eide emphasised that "the fund will be geared towards supporting selected cross-cutting issues of regional importance and in line with ASEAN´s roadmaps."

The details of the cooperation will be reflected in an ASEAN-Norway Joint Declaration on enhanced cooperation.

The Treaty of Amity and Cooperation (TAC) is a non-aggression and cooperation pact between ASEAN members and their partners. The Treaty was first signed in February 1976 by the leaders of the then members of ASEAN (Indonesia, Malaysia, Thailand, Singapore, Philippines) and has since been amended three times to include non-ASEAN members and more recently regional organisations. Today, the non-ASEAN parties to the TAC are Papua New Guinea, China, India, Japan, Pakistan, South Korea, Russia, New Zealand, Mongolia, Australia, France, East Timor, Bangladesh, Sri Lanka, North Korea, United States, EU and the United Kingdom.