”I am very pleased that Professor Pachauri has accepted the invitation. Pachauri has contributed a lot to draw attention to the effects of climate change and give the world solid and credible knowledge about the problem.  I have therefore invited him to Antarctica, a part of the globe where climate changes are very clear”, the Prime Minister says.

Polar research is decisive for the knowledge of climate changes, and Norway has particular qualifications to play a unique role in this field of research. At the Troll station Stoltenberg and Pachauri will have contact with the Norwegian-US research expedition, at the time reaching the South Pole. Stoltenberg’s visit is part of Norway’s programme for the International Polar Year 2008, a joint effort for Arctic and Antarctic international research. The Polar Year will offer new knowledge in the climate field. 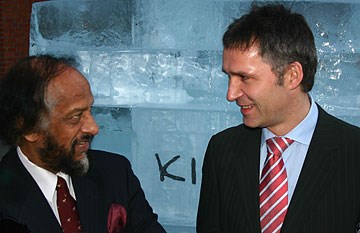 Stoltenberg today met Pachauri at the Norwegian Museum of Science and Technology, in Oslo, where he also opened the museum’s ”Klima X” exhibition.

In his speech the Prime Minister quoted Norwegian children’s climate hopes for the future: ”I have a hope, I have a faith that research will cut CO2. That new cars will be invented, fuelled by nettles, mushrooms and old caramels”.

”This quote gives me hope for the future, but it also tells us that we must act. We need a new and binding climate agreement instructing all major polluters to cut their emissions, and we must go for research and technology for capture and safe storage of CO2”, Prime Minister Jens Stoltenberg said. 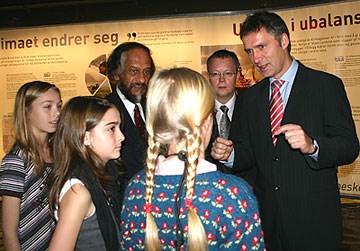