Continued focus on solidarity, value creation and social justice. This was how Prime Minister Jens Stoltenberg, Finance Minister Kristin Halvorsen and Minister of Transport and Communications Liv Signe Navarsete summed up the majority Government’s new policy platform at Soria Moria today. Employment, education, welfare and climate change were singled out as priority areas for the next four years.

Continued focus on solidarity, value creation and social justice. This was how Prime Minister Jens Stoltenberg, Finance Minister Kristin Halvorsen and Minister of Transport and Communications Liv Signe Navarsete summed up the majority Government’s new policy platform at Soria Moria today. Employment, education, welfare and climate change were singled out as priority areas for the next four years.

Prime Minister Jens Stoltenberg (leader of the Labour Party) commented: “Over the last four years, the parties in the coalition Government have demonstrated their ability to find good common solutions. The Government will continue to promote solidarity and social justice. We know that the next parliamentary term will be challenging, as Norway faces a very different economic situation compared with the situation at the beginning of the previous term. At the same time, we have to address the problem of climate change. I am looking forward to taking on these tasks together with the other coalition parties. The platform we have presented today provides a good basis for our policies for the next four years. It is a platform for high employment, further development of welfare services and continued responsible economic management.”

The environment and climate change will be high up on the agenda during the next parliamentary term. Minister of Finance Kristin Halvorsen (leader of the Socialist Left Party) pointed out: “Norway is to be a pioneer in climate policy, and we are stepping up our efforts to promote renewable energy. We will make it easier to make environmentally sound choices. And the public sector must take the lead.”

Knowledge and education are also important focus areas in the new platform. The Government’s main priority in the education sector is to increase the number of well qualified teachers. A maximum limit for the pupil–teacher ratio is to be set for each school. In addition, free assistance with homework will be offered in connection with the after-school care scheme, and efforts to prevent pupils dropping out of upper secondary school will be boosted.

Minister of Transport and Communications Liv Signe Navarsete (leader of the Centre Party) continued: “Most value creation takes place at municipal level. We will therefore ensure that the municipalities continue to receive more money in the next period, and can thus provide people with good local services. We must also seek to ensure secure jobs through an active business policy throughout the country.”

The three party leaders went on to emphasise that universal employment is an overriding goal. The Government will pursue a policy that facilitates innovation, knowledge development and the creation of more green jobs. In the next parliamentary term, the Government will maintain the current overall tax level, but there is scope for better distribution of wealth.

Mr Stoltenberg also underlined: “We will improve, strengthen and renew the public welfare services so that we are better equipped to meet future needs and challenges.” Other measures announced in the platform include: implementation of the reform to improve coordination in the health sector, a higher level of specialisation in the hospital sector, better treatment of substance abusers, and more rapid development of nursing homes to ensure full coverage by 2015.

The Government will base its foreign policy on the UN, international law, our membership of NATO, the EEA Agreement and Norway’s status as a non-member of the EU. The Government will continue to set high targets for its aid efforts, and the long-term plan for the Norwegian Defence remains unchanged. All this is also set out in the platform.

“In this policy platform we are presenting our common policy objectives for the next four years. The extent to which we succeed in achieving these objectives will depend on the economic situation,” Mr Stoltenberg added.

Important objectives for the coming period are: 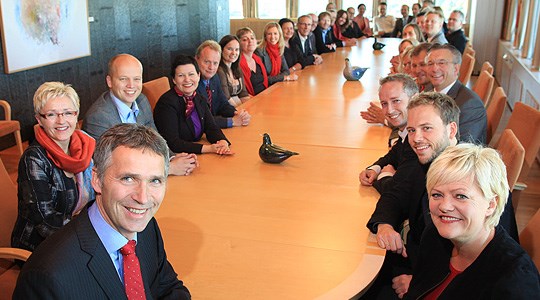