“Agreement has now been reached between the Norwegian and the Russian negotiating delegations on the bilateral maritime delimitation in the Barents Sea and the Arctic Ocean," said Prime Minister Jens Stoltenberg.

“Agreement has now been reached between the Norwegian and the Russian negotiating delegations on the bilateral maritime delimitation in the Barents Sea and the Arctic Ocean," said Prime Minister Jens Stoltenberg. 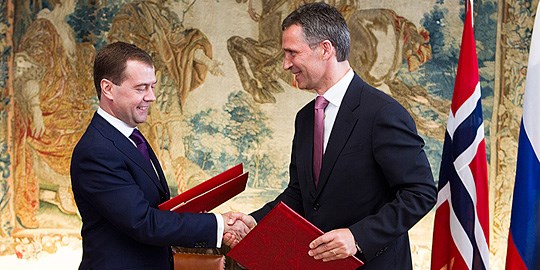 “This is a historic day. We have reached a breakthrough in the most important outstanding issue between Norway and the Russian Federation,” said Prime Minister Jens Stoltenberg.

The agreement will be announced today in a joint statement by the Foreign Ministers of Norway and the Russian Federation. It is based on the joint declaration, which Prime Minister Stoltenberg and President Medvedev will sign today.

The issue of the maritime delimitation between Norway and the Russian Federation in the Barents Sea and the Arctic Ocean has been the object of extensive negotiations over the last 40 years. The negotiations have now been completed, but some technical control work remains before the final treaty is ready for signature. After that it will be considered by the two countries’ national assemblies.

"The agreement is the result of meticulous efforts on the basis of international law, and is an expression of the great importance attached to international law by Norway and the Russian Federation as coastal states. The negotiated solution appears to be well balanced and will benefit both our countries,” said Prime Minister Stoltenberg.

The recommended solution involves a maritime delimitation line that divides the overall disputed area of about 175 000 square kilometres in two parts of approximately the same size. In addition to a maritime delimitation line, the two delegations recommend the adoption of treaty provisions regarding cooperation on fisheries and petroleum activities.  Norway and the Russian Federation wish to maintain and enhance the longstanding cooperation with regard to living marine resources in the area. In the field of hydrocarbon cooperation, the two delegations recommend the adoption of detailed rules and procedures ensuring efficient and responsible management of their hydrocarbon resources in cases where any single oil or gas deposits should extend across the delimitation line.

“Agreement on the maritime delimitation line opens up new prospects for cooperation in the north on resources, trade and industry, employment opportunities and people-to-people cooperation across our common border. This is a historic day, especially for our populations in the north. I want to extend my thanks to our two Foreign Ministers and the negotiators for their extensive efforts, which have now proved successful,” said Mr Stoltenberg.