Norway is establishing an embassy in Yangon in Myanmar. This was announced by Prime Minister Jens Stoltenberg when he met the President of Myanmar, Thein Sein, in Oslo on Tuesday. The President is in Norway on an official visit. 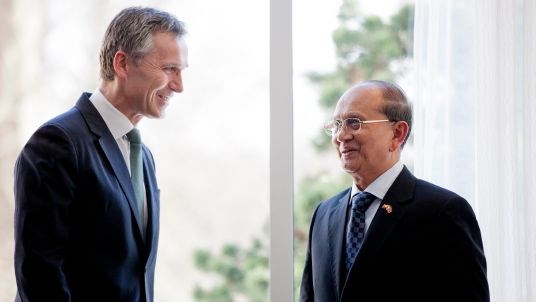 Norway is establishing an embassy in Yangon in Myanmar. This was announced by Prime Minister Jens Stoltenberg when he met the President of Myanmar, Thein Sein, in Oslo on Tuesday. The President is in Norway on an official visit.

“Due to the increasing cooperation between Norway and Myanmar, we have decided to upgrade our embassy office to a full-scale embassy during the autumn,” said Mr Stoltenberg.

Mr Sein is on his first visit to Europe. On Tuesday afternoon, he had political talks with Mr Stoltenberg.

Cooperation between the two countries and the current situation in Myanmar were discussed during these talks. Mr Stoltenberg praised Mr Sein for the reform process and the important steps that Myanmar has taken towards a more democratic and peaceful society.

“The transition to civilian rule, the release of political prisoners, the by-election in which Aung San Suu Kyi and her party, NLD, won seats in the parliament, and the ending of media censorship are important milestones in the reform process in Myanmar,” said Mr Stoltenberg.

During the talks, Mr Stoltenberg said that Norway will continue to provide support in areas where we have particular expertise and Myanmar is interested in cooperation. Democracy, natural resource management and protection of the environment are relevant areas in this context, in addition to support for the peace process. It is vital that Myanmar is able to manage its natural resources in a sustainable way and to ensure that investments and aid benefit the population as a whole. This is another area where Norway has relevant experience to share.

“Norway has a long history of supporting democracy in Myanmar. We provided support for the reform process at an early stage, and will continue to support forces for reform and sustainable economic development in the country,” said Mr Stoltenberg.

They also discussed the part the Norwegian business sector can play as a responsible partner that can make a positive contribution to Myanmar’s development. The importance of stable and predictable framework conditions for business was also underlined.