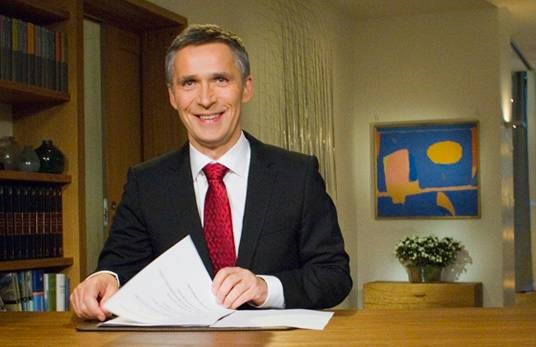 Two months ago, little Danica was born in Manila.
She is world citizen number seven billion.
In a few months’ time, a baby will be born who will bring the Norwegian population up to five million.

What will become of these two infants?
What kind of future awaits them?

That is what makes it so infinitely distressing when a young person dies.
No parent should have to lose a child.

Many people were deeply affected by the events of 22 July last year.
Fathers, mothers, siblings and grandparents had to follow their loved ones to their graves.

I have thought of the survivors and the bereaved every day since 22 July.
How are you coping?
Why did this have to happen?

Five months on, we still need more knowledge in order to understand what happened.

First, there will be the trial of the man responsible for these atrocities. Then, the commission will give its objective and balanced account of the events of 22 July.
This means that we will have to relive those tragic events.
I am confident that we will be able to do this.
Because the Norwegian people made history last summer.

First we were paralysed by the bomb attack and the shootings.
Then something happened.
We picked ourselves up, shook off the fear and reaffirmed our commitment to democracy.

We demonstrated this in processions where people carried roses and torches.
In funerals, churches and mosques, and as we gathered in front of TV screens.
We were united as one nation.
At this, life’s darkest moment, people discovered the best in themselves.

This has strengthened my faith in the goodness of humanity.
In hope.
And in the power that lies in the will of a nation.

Children were also born in Norway on 22 July.
One of them was Thomas.

Today, he is a happy and contented little boy living in Lillehammer.

Thomas will have to live with the fact that his birthday will always be associated with tragedy.

We must make sure that that isn’t the whole story.
We must show that this crisis also brought out the warmth and dignity of the people of our country.

Thomas and Danica will grow up on opposite sides of a shared world.
Our task is to show that there is far more that unites them than divides them.

That we grow as individuals when we are willing to learn from one another.
That we become stronger when we manage to respect differences.
That we achieve most when we dare to trust each other.

One day, Thomas and Danica may become friends on the Facebook of the future.

Thomas will learn about Manila.
And Danica will see pictures of something completely new to her: the ski jumps in Lillehammer.

This is the Internet at its best.

At its worst, the Internet enables those holding totalitarian views to speak freely and unchallenged from the dark recesses of the World Wide Web.
We must respond with firmness whenever we encounter this.

We must use knowledge to expose them for what they are.

If we are to take responsibility for the future, we must speak out against extremism.
I urge you all to be good digital watchdogs.

Not in order to censor opinions or stifle debate.
We must be able to listen to views we find disturbing.
Views that may be irritating, provocative or even shocking.
But we must argue against them.
We must respond.

When we say “no, you’re wrong”, we are exercising freedom of expression in a responsible way.
We already do this around the lunch table at work.
Now the time has come to do so on the Internet.

The first day of the New Year is almost over.
In 2012, we will continue to focus on the big issues:

These are overwhelming tasks.
It is easy to think that we can’t make a difference.
But we can.

Through hard work, laying one brick at a time, the world moves forward. In the course of just a few years, many hundreds of millions of people have been freed from the chains of poverty.
Fewer people are dying because of war. More people are living in freedom.

Never before have so many people chosen their leaders in free and democratic elections.

We saw this again during the Arab Spring. The will of the people exposed the lies of regimes and brought about change.

But what touches me personally most is seeing that fewer children are dying and more mothers surviving.

The day they give birth is still the most dangerous day in many women’s lives.

Last year, we saved 600 000 more children. Many of them with a single vaccination.

And Norway plays a key role in this.
This is something we can all be proud of.

The UN Intergovernmental Panel on Climate Change has warned that there will be more frequent and more severe weather events in future.

Norway was lashed by storms during the Christmas holiday. Those who experienced the hurricane were particularly affected.
But all of Norway has followed your situation.

We admire the people of western Norway for their ability to cope with such extreme situations. I want to commend all of you who have spared no effort in helping and rescuing those affected and repairing the damage.

Regrettably, one person was killed in the storm response efforts.

When I visit western Norway in a few days’ time, I will discuss emergency preparedness with those who took part in these efforts.

We must equip ourselves to cope with the impacts of climate change. But above all, we must seek to prevent them.

Last year was a disappointment when it comes to climate change.

Progress was made, but no breakthrough was achieved at the meeting in Durban either.
But we can’t give up.

Norway must continue to work actively to bring about binding agreements.
Because there is no alternative.

The world must stand together on this issue.

Otherwise, we will fail Danica in Manila and Thomas in Lillehammer.

Another challenge facing us in the new year is the European debt crisis.

At first glance, the crisis appears to be about money.
But it’s really about people.

Once again we are seeing legions of unemployed people in Europe. Many young people are simply losing faith in the future.

Europe cannot allow this to happen.

For us in Norway, it is a matter of safeguarding jobs and keeping mortgage interest rates low.

We don’t yet know how severely affected we will be.
But I promise that we will take action when it is necessary.
Just as we have in the past.

Without peace there is no future.
Many Norwegians are engaged in peace efforts around the world.

As aid workers.
As mine clearers.
Or as pirate hunters off the coast of Somalia.

They are often involved in dangerous missions.

Last year, Norwegian fighter pilots defended the Libyan people against the brutality of the Gaddafi regime.

Our personnel were among the most highly trained in a broad-based coalition, and have since received well-deserved praise from our allies.

I would like to extend a warm thanks to all those who are involved in peacebuilding operations abroad.
At the same time, we remember our fallen.
Again, we have lost some of our best men and women.

Lieutenant Colonel Siri Skare died in an attack on the UN compound in Mazer-e-Sharif.

The lawyer Ingrid Midtgaard was killed in a bomb attack on the UN office complex in Nigeria.

We were deeply saddened by the news of their deaths.

They will always be with us.

This year, I would like to send a particularly warm greeting to His Majesty King Harald and Her Majesty Queen Sonja.

The Royal Family have perhaps never been closer to their people in peacetime than they were following the events of 22 July.

They helped to ease the pain with well-chosen words.

Both the King and the Queen will celebrate their 75th birthdays this year.

Five million Norwegians will congratulate King Harald and Queen Sonja during the jubliee year. They will thank them for everything they have done, and send their very best wishes.

On 14 December, I participated in the celebrations in honour of Roald Amundsen and his men at the South Pole.
It was a great moment.

People from all over the world were gathered to pay tribute to the polar heroes and the Norwegian flag.

The notes of the Norwegian national anthem rang out in the vast, silent expanse of whiteness.

Norway seemed so close, even though we were so far away.
There, at the opposite end of the world, I saw a Norway that we can all be proud of.

A country of pioneers who have left their mark on history.

A nation that managed to meet evil with good in the face of the brutal attacks last summer.

And everyday heroes who make a small country great.

Let this be the spirit with which we shape the future.