The US Department of Defence today confirmed that future European engine maintenance for the F-35 will be performed by three partner nations, Turkey, Norway and the Netherlands. This means that the Norwegian state owned enterprise, AIM Norway, has succeeded in achieving a position as one of three businesses that will be performing maintenance on several hundred engines for the F-35, which is expected to remain in service until well after 2050. 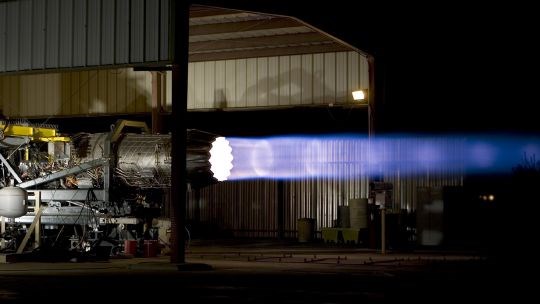 The F-135 engine, developed by Pratt & Whitney, will power all F-35 aircraft for Norway and other users worldwide. Image shows the engine during testing in Florida (Photo: Joint Program Office)

The US Department of Defence today confirmed that future European engine maintenance for the F-35 will be performed by three partner nations, Turkey, Norway and the Netherlands. This means that the Norwegian state owned enterprise, AIM Norway, has succeeded in achieving a position as one of three businesses that will be performing maintenance on several hundred engines for the F-35, which is expected to remain in service until well after 2050.

- I am very pleased by this decision, and it proves yet again how Norwegian industry is widely recognised for the quality and skill that they continue to deliver to the F-35, says Norwegian State Secretary for Defence (Deputy Minister) Mr. Øystein Bø.

- This is also a clear result of the comprehensive, and long standing efforts by the Ministry of Defence to help promote Norwegian industry within the F-35 program. We still have a long process ahead of us before the Norwegian depot will be ready, but nonetheless I’d like to congratulate AIM Norway on this achievement. This is a major step in the right direction, says State Secretary Bø.

The intention of Norway and the other partner nations in the F-35-program is to gradually develop the regional maintenance capability for the F-35 as the number of aircraft in Europe grows. In line with the plan that has been presented today, Turkey will stand up the first engine depot in 2018, followed by Norway and the Netherlands 2-3 years later. 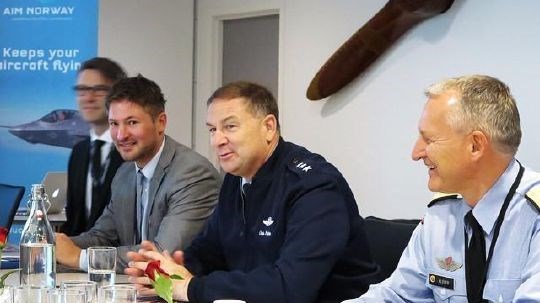 - In addition to AIM Norway, I would also like to congratulate Turkey, which will be establishing the first European engine depot capability to the F-35. Our plan now is to continue our dialogue with the F-35 partnership to ensure that this plan adequately covers our operational requirements as we transition from the F-16 to the F-35. Our combat aircraft are essential for Norwegian security, which in turn means that we have to ensure that we have the right system in place to support us as we stand up our new combat aircraft capability.

Maintenance of the F-35 will differ significantly from that of its predecessor, the F-16, with the aircraft itself rarely leaving its main operating base for maintenance. When a part of the F-35 requires maintenance, it will be taken out of the aircraft and sent to a central workshop, while the aircraft in the meantime receives a new part and is able to continue its regular operations. This means that in the future, AIM Norway may be sent engines, in part or in full, from all F-35 users in Europe. The F-35-engine itself is designed in such a way that it may be divided into several different modules that can be replaced and maintained individually, significantly simplifying the process. Required heavy maintenance of the aircraft itself will take place in a facility in Italy, supported as needed by British workshops. The overall purpose of this model is to allow the partnership to collectively operate the F-35 fleet in the most efficient way possible.

- The engine and airframe maintenance locations confirmed today is just a first step, and there will be new opportunities for Norwegian industry as we work to define the future F-35 sustainment infrastructure. These are opportunities that we hope Norwegian industry will actively pursue in and that they will do what they can to demonstrate the added value they can provide to the wider partnership, says Norwegian State Secretary of Defence, Mr. Øystein Bø.

• Norway intends to procure up to 52 F-35A to ensure that its Armed Forces are able to continue to resolve their missions in the best way possible.

• The Norwegian procurement of the F-35 is estimated to cost NOK 66,2 billion in real 2014 values (including weapons, training, support equipment, simulators and other related investments.)

• The first four Norwegian aircraft were authorized by the Norwegian Parliament in 2011, with the first two scheduled for delivery in 2015 as part of LRIP 7.