On Tuesday, the Utgard Plan for Development and Operations was submitted by Statoil and partners to the Norwegian Minister of Petroleum and Energy, Mr. Tord Lien.

The Utgard field was discovered in 1982. Recoverable reserves are estimated at 56.4 million barrels of oil equivalent (o.e.), with capital expenditures projected at about 3.5 billion Norwegian Krone.  Discovered in 1982, Utgard (formerly Alfa Sentral) is located 21 kilometres from the Sleipner field. Utgard straddles the UK-Norway delimitation line.

- The Utgard project contributes to maintaining production and increased recovery on the Norwegian Continental Shelf. The project illustrates how measures to improve efficiency and productivity lead to new profitable field developments. The petroleum industry is, and will remain, Norway's most important industry for years to come, says the Minister of Petroleum and Energy, Mr. Tord Lien.

Gas and condensate from Utgard will be transported via a new pipeline to the Sleipner field for processing, before further export to the market.

- Good cooperation and sound resource management is a prerequisite for developing trans-boundary oil and gas resources between Norway and the UK. The development will use existing infrastructure and the carbon capture and storage (CCS) capacity on the Sleipner field, says Minister Tord Lien.

Utgard is scheduled to start production by the end of 2019. At full production level, the field will produce approximately 44,000 barrels of oil equivalents per day.

Water depth 110 metres. The reservoir is located at 3 700-meter depth. Utgard will be remotely operated from Sleipner A. After processing, the liquids will be exported to Kårstø and the dry gas to Gassled. 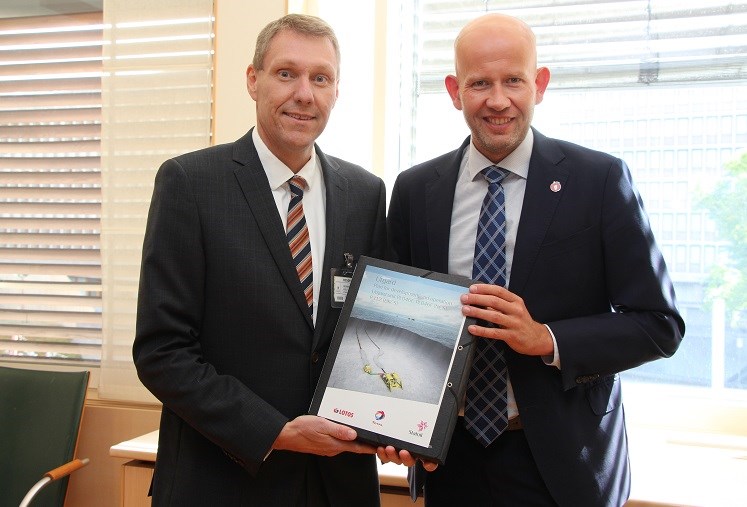