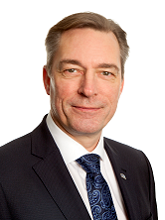 The Minister of Defence is responsible for the formation and implementation of Norwegian security and defence policy.

Before entering politics, he was the Managing director and proprietor of Båtsfjord Travel Agency. Mr. Bakke-Jensen served in the UN Interim Force in Lebanon (UNIFIL) from 1990-1991.