In May 2010, Norway signed a partnership with Indonesia to support the country's efforts to reduce greenhouse gas emissions from deforestation, forest degradation and the destruction of peat with up to 1 billion USD. Norway will mainly pay Indonesia for achieved results.

Norway has so far disbursed about NOK 795 million to climate and forest efforts in Indonesia . Most of it are activities that are part of the bilateral partnership, disbursed through the United Nations Development Programme (UNDP).

Norway's International Climate and Forest Initiative also supports civil society in Indonesia. For more information about this support, see this video (created by CIFOR) or go to Norad's web page:

Indonesia is home to the world's third largest tropical rainforest, which covers around 1 million km2.

After China and the United States, Indonesia ranks among the countries producing the highest greenhouse gas emissions in the world, when emissions from forests and peat are included. Most of Indonesia's emissions come from deforestation and converting extremely carbon-rich peat to plantations.

The establishment of palm oil plantations is a major factor behind deforestation in Indonesia. Rainforest is also felled to provide space for fast growing trees that can easily be turned into pulp for paper. Mining is another driver. Estimates indicate that around 1 million hectares of forest is lost each year in Indonesia.

Climate pledges and the partnership

Indonesia has pledged to reduce its greenhouse gas emissions by 29% with its own efforts, and 41% with international aid.

In May 2010, Norway signed a climate and forest agreement with Indonesia. Norway will support Indonesia's efforts with up to USD 1 billion in the years leading up to 2020. This support is contingent on Indonesia delivering on its targets.

The size of the Norwegian contribution will depend on how successful the Indonesians are at reducing deforestation. Norway will primarily pay for the results achieved, first in the form of political reforms and capacity development, and later for independently verified reductions in emissions. The partnership will be evaluated before the phase where we pay for results is reached.

In order to successfully combat climate change, one must successfully grow the economies of developing countries at the same time. Norway does not want Indonesia to reduce its deforestation at the expense of economic growth and fighting poverty. On the contrary, we consider the two agendas strongly complementary.

With adequate political management and good land use planning, forest-based industries such as palm oil and pulp production can continue to contribute to economic growth without this being at the expense of virgin forest and peat marshes. Productivity on existing agricultural lands – especially smallholder farms, can be significantly increased, and new production can be relocated to already destroyed forest areas instead of destroying new forest. Part of the agreement between Norway and Indonesia involves Indonesia gaining alternative sources of income for those who currently make a living from destroying the forest. 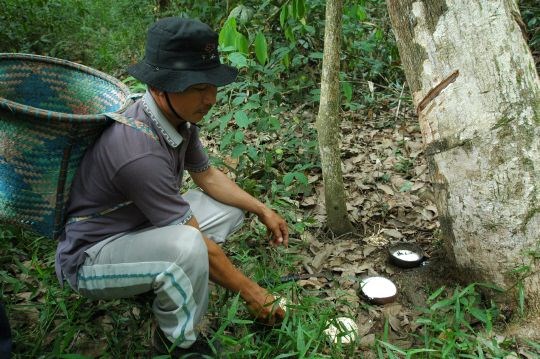 Rubber tappers in Indonesia's rainforest. Harvesting rubber from rubber trees could be an important, sustainable source of income for people who live in and near the forest. (Photo: Elisabeth Brinch Sand/KLD)

Letter of intent on the climate and forest partnership between Norway and Indonesia (May 2010).

Joint Concept Note on the first phase of the climate and forest partnership between Norway and Indonesia.