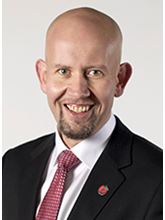 Tord André Lien was appointed Minister of Petroleum and Energy on 16 October 2013. He has been a member of the Norwegian Parliament for the Progress Party since 2005. From 2009 to 2013 he served as Second Vice Chair of the Standing Committee on Education, Research and Church Affairs. From 2005 to 2009 he served as a member of the Standing Committee on Energy and the Environment. Lien holds a Master’s degree in History from the Norwegian University of Technology and Science.