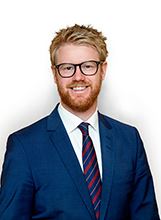 He has a BA in Political Science and an MSc in history from NTNU. He was a Fullbright scholar at the University of Minnesota-Twin Cities 2007-2008.