’It doesn’t require a lot of effort on my part, but it means a lot to the people we are helping,’ says George Maragoudakis. He is an interpreter in the new asylum system in Greece, which has been developed with support from Norway through the EEA and Norway Grants. 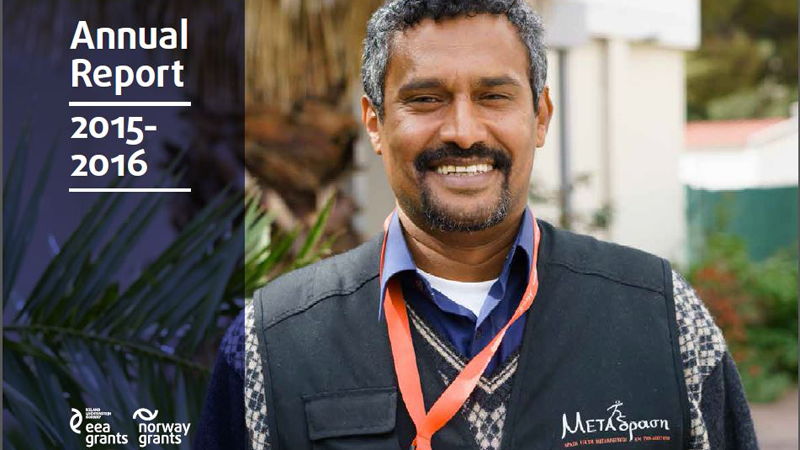 Mr Maragoudakis is featured on the front of the 2015/2016 annual report for the EEA and Norway Grants. One section of the report describes the results that have been achieved in strengthening capacity to deal with migration and securing the external borders of Europe.

About 30 % of all the reception places in Greece for unaccompanied minors and other vulnerable groups seeking asylum are funded through the EEA and Norway Grants. The head of Greece’s asylum service has reported that they would not be able to continue their activities without the support from Norway.

‘Norway cannot solve the migration challenges in Greece or in other European countries on its own. But the Government will engage in dialogue with beneficiary states about using more of the EEA and Norway Grant funds in this area in the years ahead,’ said Minister of EEA and EU Affairs Elisabeth Aspaker.

Research and development are of key importance in making Europe more competitive and more attractive to investors. Did you know that Norway and Poland, through the EEA and Norway Grants, have established the largest bilateral research programme in Europe? Research programmes have been launched in seven countries, with a total of 130 Norwegian research and educational institutions involved in collaborative projects. So far, 207 articles have been published in international journals reporting on the results that have been achieved.

‘These programmes give Norwegian researchers the opportunity to gain international experience. The networks and contacts that are established also provide a basis for further collaboration in other projects, including the EU research programme Horizon 2020, in which  Norway is participating as a full member,’ Ms Aspaker said.

Strengthening relations between Norway and the individual beneficiary state is one of the overall objectives of the EEA and Norway Grants. The 2015/2016 annual report reveals the scope of the cooperation involved.

The Norwegian programme partners have strengthened their cooperation with corresponding organisations in the beneficiary states, laying the groundwork for Norwegian participation in programme projects. Norwegian partners are involved in more than 1 660 projects within the various programmes (for more details, see page 47).

In addition to the results that are achieved in the programmes and projects, the report shows that the EEA and Norway Grants also have a positive influence on the participants’ perceptions of each other. More than 70 % of those participating say that cooperation has contributed to increased knowledge and understanding of each other’s culture and society to a considerable or a great degree.

‘The dual objective of the EEA and Norway Grants provides a unique opportunity for Norwegian actors. Cross-border cooperation within Europe will become increasingly important in the years ahead. We will continue to facilitate such cooperation,’ Ms Aspaker said.