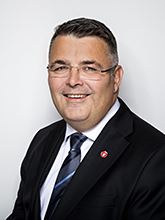 Kjell-Børge Freiberg was appointed Minister of Petroleum and Energy on August 31st 2018. He is a representative of the Norwegian Progress Party.

Freiberg served as Deputy Minister of Petroleum and Energy from October 2015 until June 2017. In 2017, he was elected Member of Parliament from the County of Nordland.

He was previously the Mayor of Hadsel municipality, a position he had held since 2007. He had different roles in the Progress Party from 1999, among them County Chair for Nordland county and Party Secretary with responsibility for Nordland, Troms and Finnmark counties. Before becoming a full time politician, Freiberg worked for different companies in the Norwegian fishing and aquaculture industry.