The WTO Panel submitted its 337-page report to the parties on 10 August, but it was not made public until 16 November, after translation into the other two of the WTO’s official languages.

The WTO Panel submitted its 337-page report to the parties on 10 August, but it was not made public until 16 November, after translation into the other two of the WTO’s official languages.

The Panel ruled in favour of Norway on 22 points, the largest number ever in an anti-dumping case considered by a WTO panel. On 15 points, the Panel concluded that the EU had not acted inconsistently with the WTO Anti-Dumping Agreement, while for reasons of judicial economy, it made no findings with respect to 10 points as these were resolved through findings on other points.

The entire text of the report can be downloaded from the WTO’s website.

A.  The basis for the EU’s dumping investigation was flawed 1. The basic requirements for introducing an anti-dumping measure

According to WTO rules, a large number of requirements must be met before an investigation is initiated, during the investigation and when an anti-dumping measure is introduced. In this case, the EU was required to demonstrate the following:

The Panel finds that the EU has made a number of errors on these and various other points.

2. Improper definition of the EU’s domestic industry led to a number of errors

In this case the Commission grouped different types of salmon products into a single product, e.g. whole fish were put together with salmon fillets. At the same time, the EU defined its domestic industry exclusively as producers of whole fish, in other words, salmon farmers in Scotland, and only examined the accounts of five Scottish fish farmers. Thus, the EU wrongly excluded its own producers of fillets from the investigation.

The EU’s definition of the product and the domestic industry

Since the Commission defined the product as including all types of salmon (except for smoked salmon), the Panel finds that the processing industry, which produces fillets, cannot be excluded from the investigation. All actors in the EU must be included, and there is no basis in the rules for such an exclusion. The Panel states that given the mismatch between the product and the domestic industry, the Commission’s basis for initiating the anti-dumping investigation was flawed.

In the light of this, the Panel concludes that the Commission’s basis for initiating an anti-dumping investigation of Norwegian companies was flawed, describing it as a potentially fatal flaw (paragraph 7.118 of the report):

“[...], committing an error which is potentially fatal to the WTO-consistency of the investigating authority's determinations on those issues.”

In other words, not all parts of the EU processing industry whose products come within the scope of the product definition were asked whether they supported the initiation of the investigation and the introduction of the measure. Nor were these companies (which constitute the properly defined domestic industry) investigated with a view to determination of injury.  This mismatch undermines the entire basis for the investigation and, thus, for the introduction of the anti-dumping measure.

Norway also argued that the EU’s product definition was incorrect. The Commission grouped various presentations of salmon together into a single product.  Norway argued that whole gutted salmon and salmon fillets should be defined as different products because they are produced by different industries (fish farmers and processing companies) and have different production costs. The Panel does not uphold Norway’s claim on this point, stating that the WTO Anti-Dumping Agreement does not give a clear indication of what should be considered as a single product.  Instead the panel emphasises that the definition of the product must comport with the definition of the domestic industry, see above.

B. The EU failed to investigate the proper Norwegian companies

The Commission selected 10 companies to represent the Norwegian salmon industry as a whole. The remaining non-investigated companies were divided into two different categories: “cooperating companies” and “non-cooperating” companies. 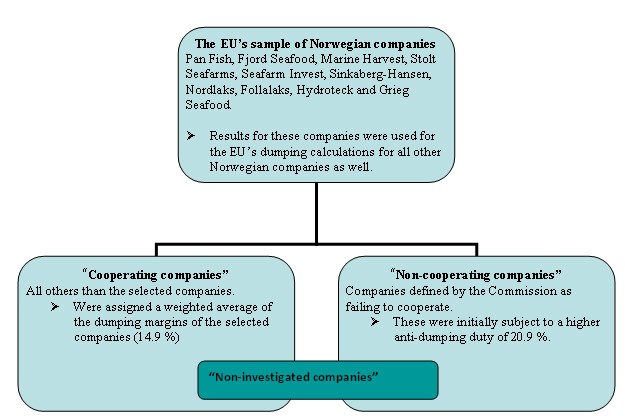 1. The EU’s selection of Norwegian companies is in conflict with WTO rules

According to WTO rules, the sample of Norwegian companies must either be statistically valid or constitute “the largest percentage of the volume of the exports from the country in question which can reasonably be investigated”. Although the EU claimed to have used the latter method, it did not select the 10 largest companies.

Norway was able to demonstrate that the Commission had failed to include in its sample major Norwegian producers that export large volumes to the EU and that are known to be very efficient and have low production costs.  Instead the Commission included several small fish farmers. The panel upheld Norway’s claim on this point.

C. The dumping calculations – many errors by the EU in calculating companies’ production costs   1. Key issues in the calculation of margins of dumping

Whether or not a commodity is being dumped thus depends on whether the export price to the EU is lower than production costs – including sales costs, transport, profit, etc. This substitute for the domestic market price is called the “constructed normal value”.

Norway claimed that the EU broke a number of rules in its calculation of the margins of dumping for these companies: the Commission calculated the companies’ production costs incorrectly and rejected actual figures from their annual accounts. The result of this approach was that the Commission alleged that dumping had taken place, when in fact it had not. For example the Commission increased the production cost figures for some companies by more than a third.

The Panel has ruled in favour of Norway on numerous points where the Commission calculated companies’ production costs incorrectly. However, there are several cost elements on which the Panel has not given a ruling. In the light of the cost elements for which Norway’s claims are upheld, the dumping margins calculated by the Commission should have been lower for all the companies investigated, and in some cases under “zero” (i.e. there was no dumping).

2. Norwegian companies that were not investigated and non-cooperating companies

If the dumping margins for the companies that were investigated are incorrect, the weighted average will automatically be incorrect as well. In addition, the EU made other errors in calculating the average. The Panel ruled in favour of Norway on these points.

The EU also used a category called “non-cooperating companies”. Initially, a higher anti-dumping duty was fixed for these companies since they were considered not to have cooperated. Norway objected to this, since the WTO rules do not permit the establishment of a separate category of this kind for companies that have not been investigated. The Panel found in Norway’s favour on this point with respect to a group of companies that the EC failed to contact, but nonetheless accepted that it was permissible to impose a higher rate of duty on companies that were deemed to receive the first questionnaires from an industry association, and did not answer them.

D. No basis even for claiming that Scottish producers were injured by imports of Norwegian salmon

In addition to the incorrect definition of the EU’s domestic industry, which rendered the entire injury determination illegal, there were a number of errors in the injury analysis itself.

According to the anti-dumping rules, determination of injury to the EU industry must be based on positive evidence and involve an objective examination of the volume of dumped imports and the impact of these imports on prices in the domestic market (Article 3.1 of the Anti-Dumping Agreement).

The Panel found in favour of Norway on all points relating to the EU’s injury and causation analyses.

The current anti-dumping measure involves six different minimum import prices (MIPs) for different presentations of farmed salmon. The EU claimed that these were based on the prices necessary to avoid injury to EU companies. Furthermore, it was claimed that these MIPs were lower than the Norwegian companies’ “constructed normal values” (i.e. prices “without dumping”) calculated for each producer by the EU itself. The EU therefore disregarded the dumping margins and instead laid down single minimum prices for all Norwegian producers.

The Panel found in Norway’s favour on several points relating to the way the EU determined the MIPs, which taken as a whole means that the MIPs for Norwegian salmon are incorrectly calculated.

Norway also pointed out that, in reality, the EU only calculated the price level for one presentation of salmon, and then used unknown conversion factors to “create” prices for the other presentations. Norway argued that these conversion factors did not take into account the costs of producing the different products, and that these prices were not determined on an objective factual basis. On several occasions, Norway and the Panel requested the EU to present its calculations of MIPs. For many months, the EU refused to provide the material, and the material finally presented was ruled to be insufficient. Nevertheless, because of other rulings against the EU on the MIPs, the Panel did not rule against the EU on the conversion factors used.

F. The EU disregarded several due process safeguards by failing to give Norway and other interested parties access to documents and information relating to the case