In 2012, Norway entered into a climate- and forest agreement with Vietnam, through the UN. The agreement includes a support of 180 million Norwegian kroner to Vietnam’s preparatory activities to reduce greenhouse gas emissions from deforestation (REDD+). 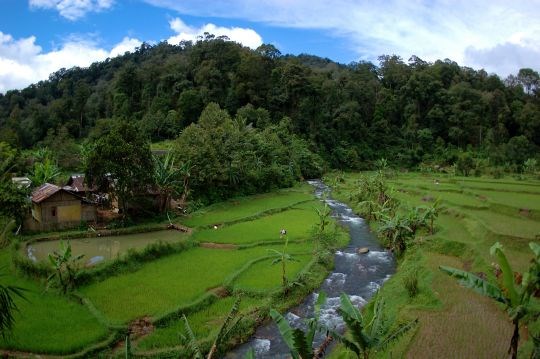 The Forests of Vietnam

Vietnam is characterised by a long coastline with mangrove forests, and pine, limestone and lowland rainforests inland, as well many rivers and great variety in its topography, climate and soils. The Mekong region, of which Vietnam forms a part, is one of the areas of the world with the greatest diversity of rare flora and fauna. Species that are new to science continue to be uncovered.

Deforestation and Climate Change in Vietnam

The country has suffered considerable deforestation since the 1940s, as a result of war and population increase. Between 1943 and 1990, forest cover decreased from 43 to 27%. Since 1990, massive afforestation and reforestation efforts have brought forest cover up to 40 %, or close to 15 million ha. Deforestation and degradation however continues in remaining natural forest (11 million ha), and intact natural forest providing the full range of ecosystem services now makes up less than 1% of forest area.

Vietnam is vulnerable to the impacts of climate change. These include rising sea levels, more intense monsoons, and saltwater intrusion into the fertile Mekong Delta. There are already indications that Vietnam's position as one of the largest rice exporters in the world could be jeopardized, along with domestic food security.

Role of Vietnam in the climate negotiations

Vietnam presented its Intended Nationally Determined Contribution in due time before the climate meeting in Paris. The plan assumes that emissions of greenhouse gases in 2020 will double from the 2010 level of 250 mill. tonnes CO2, and triple in 2030. Vietnam commits to reduce emissions from these expected levels by 8% out of its own funds, and up to 25% with international support. In 2016, Vietnam adopted a National Action Plan to implement the Paris Agreement, which prioritizes activities to reduce deforestation and increase forest restoration.

In December 2012, at the climate summit in Doha, Norway and Vietnam signed a Joint Statement on collaboration to reduce deforestation and forest degradation (REDD+). At the same time, Norway agreed to support Vietnam's preparatory work to reduce greenhouse gas emissions from deforestation and degradation of forests with up to NOK 180 million. Norway provides support through the UN-REDD Programme, consisting of UNEP, UNDP and FAO. The objective of the programme is to strengthen Vietnam’s capacity to reduce greenhouse gas emissions from forests, strengthen sustainable forest management in six pilot provinces, as well as contributing to increased collaboration with neighbouring countries to combat illegal logging and trade in timber. In 2015, the programme was granted a three-year no-cost extension.

Norway has so far disbursed NOK 177 million out of the total agreed support of NOK 180 million through the UNDP Multi Partner Trust Fund. The remaining funds will be disbursed in 2018.

Through the climate- and forest partnership with Norway, Vietnam has made progress in developing its national capacity to implement REDD+, developed policies and regulations that can help reduce emissions and started addressing illegal logging and trade in timber, in collaboration with neighbouring countries. Vietnam is expecting to achieve all the requirements for REDD+ readiness in 2017 and is currently seeking support from multilateral organizations to scale up REDD+ implementation in a total of 11 provinces in the North Central Coast and the Central Highland regions.

Support to civil society in partner countries forms an important part of the strategy of the Norwegian Climate and Forest Initiative. A funding arrangement for this purpose is managed by Norad. Under the current call for 2016-2020 three non-governmental organizations are supported in Vietnam under this arrangement. An overview of recipients under this call may be found at the Norad website.

Vietnam also collaborates with both the EU and the US to ensure that only legal forest products are imported from Vietnam to these markets. This chiefly applies to timber imported into Vietnam for processing into furniture for export, carrying significant risk of illegal timber entering the supply chain. The improvements in forest governance and transparency inherent in these trade agreements could make a considerable contribution to reducing corruption as well as reducing emissions from forests.

Norway's development collaboration with Vietnam goes back to 1971 and has focused in particular on petroleum and fisheries management. Vietnam is now a medium-income country, and traditional ODA is now increasingly being replaced by economic cooperation and trade. Economic growth in 2015 was 6,7 per cent, but there is still significant poverty among ethnic minorities, whose subsistence is most often linked to remaining natural forest.

Norway has had a human rights dialogue with the country since 2003, which also covers the situation of the ethnic minorities.

Vietnam ranks 112 out of 168 countries in Transparency International's 2015 Corruption Perceptions Index. Norway channels all climate and forest funding through internationally recognised institutions with the capacity and competence to handle aid finance and the risk of corruption in a proper manner. Norway's support to Vietnam is channelled through the UNDP Multi Partner Trust Fund and Norway coordinates its efforts to reduce emissions and corruption with other donors, the World Bank and civil society organisations that are engaged in climate, forests and land use change issues.