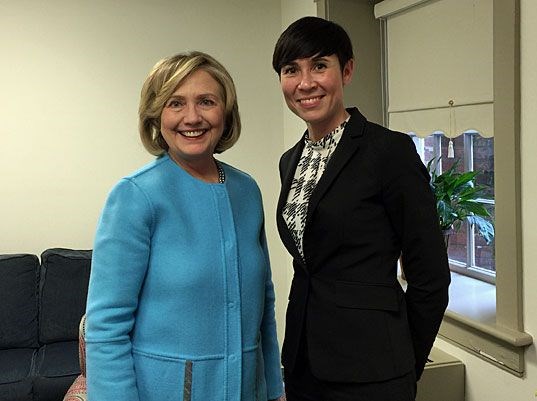 Secretary Clinton, Ambassador Verveer, distinguished professors, dear students,
• I am grateful for this opportunity to share a few remarks on the issue of smart power and inclusive leadership. I met Melanne in Oslo a little over a week ago, discussing this conference. I greatly admire the work and effort you have been making in this field for years.

• A warm thank you also to the Georgetown Institute for Women, Peace and Security. A spearhead in creating awareness and influence on women’s inclusion in peace and security processes.

• And I have to say to Secretary Clinton – she doesn’t know this – that she has a stake in me standing here. In 2009, I was a delegate at the UN General Assembly as a member of parliament. I attended a meeting Secretary Clinton was chairing on UNSCR 1325. In the middle of the meeting, my party chairman called and asked if I would like to become chairman of the Foreign Affairs and Defense Committee of the parliament. I was so inspired by the Secretary’s leadership, that I said yes. I have never forgotten, and often used, the answer she gave when asked about violence against women. She said: “It’s not cultural, it’s criminal”.

• My aim this morning is to share with you some overarching points on inclusive security, and illustrate them with a small bundle of examples.

• But first a quick look at our surroundings to provide a backdrop: An increasingly unstable and complex world. Our values - the very principles of humanity and dignity, of human rights and the rule of law – bind us together across the Atlantic. But our core values are challenged in a number of areas by the forces aiming to destabilize the world. These forces are regressive by nature, undermining the progress we’ve made. Let me mention a few:

o Such forces are in play in Ukraine, where Russia has violated the fundamentals of international law through its illegal annexation of Crimea, and its continued destabilization of Ukraine.
o In the Middle East and beyond, where ISIL, through almost unthinkable atrocities aim at establishing a so-called caliphate that would in fact enslave its population in brutality and degredation, where women are reduced to mere commodities.
o In Nigeria, where Boko Haram are deliberately targeting civilians - including young schoolgirls - in their quest to establish an oppressive regime where they can strip civilians of their basic human rights.

• For us to succeed in meeting these challenges, we need strong value-based platform – based on human rights, and on the one basic truth that women’s rights are human rights, not something else, something in a different basket – something less. And we need to realize one thing: Even the most modest goals will not be reached unless we engage men. Personally, I get annoyed when we – women – seem to think (and we do all the time!) that the world will get better and male leaders will step up and take action when all we (women) do is to meet in seminars to talk about all the wrong things men do – with all women and no men in the room. Instead, we need to involve and engage men and convince them to become agents of change.

• An important part of such a value-based platform is UNSCR 1325. From the Norwegian government, we’re currently developing our third revised action plan on 1325, to be launched early in 2015. We are four ministers shaping it together. We’re benchmarking and measuring. When thinking smart about inclusive security, we’re in for the long haul. And we – all of us - have more or less just left the runway. We have a lot of work ahead, in all countries.

• But why do we engage? Because war and the struggle for peace and stability are too important to be left to men alone. Strong security needs to be inclusive security.
1) Women are overrepresented among those hardest hit when war and conflict rage, and underrepresented among those carving out solutions.
2) There can be no lasting peace when half the population is excluded from the decision-making processes. Women must have significant roles in conflict management and peace processes. Remember: Women are not only the victims – they’re also important actors.

• On that note: From a military and defence policy perspective, the 1325-agenda is not primarily about gender equality. It’s more specifically about capability and operational effectiveness. This is not a “sisters are doing it for themselves”-campaign. Instead, it’s a question of obtaining the best effect or result.
• Let me give you three examples, one from Afghanistan and two from Norway.

• Operational lessons from Afghanistan strongly suggest that a better gender balance in military units will improve performance, situational awareness and force protection.
o In Afghanistan, it’s the women - not powerful men at the provincial or local level - who carry with them the key to families and communities.
o Norwegian Special Forces are among those with the most extensive experience from Afghanistan. So, in Kabul, our SOF units over years have built a program where Afghan female police officers are being selected, trained and integrated as Police Counter Terrorist Operators. A very successful project that has provided high operational output.
o Applying a gender perspective in military operations can in other words be  decisive in order to fulfill our mandate. It creates better access, and can crush the ceilings for local women making themselves heard in their own power structures.

• My first Norwegian example: Our Special Forces is also a unit with rigorous physical requirements. A number of female soldiers serve in the Special Forces, but not as SOF-operators. Even so, the SOF strongly advocates the operational value of female operators. So they are currently running a test-program to train and prepare a unit of female soldiers for the selection phase. These soldiers have been tested and selected in several rounds. 327 applied – 13 were in the end accepted – and they will again be able to compete with male applicants on equal footing for recruitment as SOF operators. The experiences so far are very good: The soldiers performed better mentally and physically than expected, and they’ve proven to have an even stronger sense of duty than their male colleges.

o Colonel Eirik Kristoffersen, the then commander of our Army Special Operation Command who had the idea and started this ground breaking work, was awarded the Armed Forces’ Gender Equality Price 2013 for this work. He’s now a student at the US Army War College as well as one of our most highly decorated soldiers after World War II, and I brought him with me here today. Eirik is a true agent of change.

• My second Norwegian example is about conscription. In October this year, we passed a law in parliament that gives universal military conscription, from January 1st next year. A gender-biased law on conscription has proven untenable in a modern, inclusive society. It meant missing out on half of the country’s human resources. This is an important step, but not sufficient. When rights are equally divided, duties need to be so as well.

• In 1985 Norway removed the combat exclusion rule. We still have challenges, but we also have strong role models on all levels, serving in all parts of our armed forces. Be it as submarine commanders or door gunners, they’re in their positions because they’re the best ones for the job. Last year Elise Toft was the first woman since World War II to receive a highly rated decoration for her actions in combat in Afghanistan. She underlined one thing strongly: She was awarded the medal for her accomplishments as a soldier, not as a woman.

• My ambition is that stories such as these will replace biased myths on inclusive security being “soft”, or that women in the military are simply part of a gender quota. It is about time. Thank you.

Read article about the seminar and see video of the presenters, including Ine Eriksen Søreide here.