Women Deliver and the Norwegian Ministry of Foreign Affairs, in support of Every Woman Every Child, co-hosted an event at the Commission on Population and Development in New York, 7 April 2014.

Women Deliver and the Norwegian Ministry of Foreign Affairs, in support of Every Woman Every Child, co-hosted an event at the Commission on Population and Development in New York, 7 April 2014.

The 20-year anniversary of the International Conference on Population and Development (ICPD) is an important milestone for celebrating our successes on sexual and reproductive health and rights (SRHR).

There has been tremendous progress on women’s health and gender equality since Cairo. We have good reasons to celebrate tonight.

But there is still gaps to fill, we still have work to do. 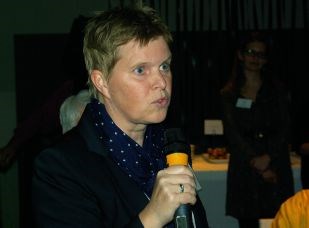 Norway is collaborating with Women Deliver on advocacy efforts because we believe that better policies on SRHR leads to better lives for the individual woman and girl, and to better societies.

Let me give you one example. Teenage pregnancies are rare in Norway. This is not a coincidence. It is the result of policies and planning based on scientific research and input from all stakeholders, including young people themselves. Teenage girls and boys who use contraceptives are considered responsible persons.

The success of our policies as well as the positive impact this has had on other societal and economic issues, such as gender equality and economic growth, has encouraged us to engage globally.

Today, 7 April, only 634 days remains until the deadline of the UN Millennium Development Goals (MDGs). Norway’s Prime Minister, Erna Solberg, is co-chairing the MDG Advocacy Group, a group of leaders mobilizing to reach the MDGs. One of her important messages is that education, in particular of girls, is a key to deliver on the MDGs. Education is a key to development.

Investments in education, done right, is one of the best investments we can do.

Education increases the utilization of health services and improves interactions with health professionals, because it is good for health.

Education is one of the most effective strategies to combat child marriage and early pregnancy with higher risk of child and mother mortality.

Education may increase young women’s autonomy, affecting their ability to influence future partners regarding the timing and number of children.

Education may provide them with the opportunity to build a better life for themselves, their families and their communities.

And not least, education is also the fundament for women and girls participation in decision making in the society as such.

As we celebrate the Cairo Programme of Action we are also deeply concerned by the many gaps in the implementation of sexual and reproductive health.

I want to end by addressing the need for young leadership. Young people should have an active role in developing policies and programs that affect their health and well-being.

This includes sexual and reproductive rights.

Our joint efforts are still needed. Let´s continue to work together to reach our goals.