- We look forward to close cooperation with and input from civil society as we approach the intergovernmental negotiation process that should culminate in a new set of development goals in the second half of 2015, sa statssekretær Brattskar i sin innledning.

Dear friends of the United Nations,

Congratulations to us all on the 68th anniversary of the UN Charter. Thank you for the invitation to speak on this occasion. It is a great pleasure to be here.

I only came back a couple of days ago from Nairobi, where I was Ambassador to Kenya and Representative to the UN Mission in Nairobi – that is the third largest head quarter in the UN family with some 5,000 UN employees. It is the only UN Headquarter in that part of the world. So I think it is appropriate that I’m here with you today.

And it is very inspiring for me to see the degree of commitment to the UN and the expertise that is represented in this room. I’m very happy to acknowledge that it is strong support for and appreciation of the UN among Norwegians, which is vital for us who help shape and implement Norway’s foreign policy.

It is also wonderful that this day is observed throughout the country with activities for children. The zeal of children and young people is very inspirational for all of us – and I think again, that it is appropriate to look at what brave Malala from Pakistan has done for education for girls. 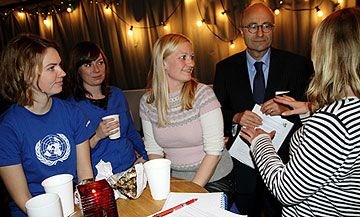 I would also like to thank those of you who have taken the initiative for this meeting and for the national consultations on the post-2015 development agenda. It is a very important and vital process.

A great strength
We will continue to build on the good work that has been done on the Millennium Development Goals as we develop a concrete agenda for the post-2015 period. The involvement of civil society in the new agenda is a great strength and adds an important dimension to our common work.

I would also like to take this opportunity to welcome to our international guests: Jordan Ryan from the UNDP, and others. A very warm welcome to all of you.

As I said, it is 68 years since the United Nations Charter entered into force. That is a respectable age, but I feel that the UN is still a young organisation. And the UN is much more than a multilateral organisation and the sum of its Member States:

- The UN is where large powers and not so large states from all corners of the world get together to reach binding decisions about international peace and security. This is why we so strongly support the UN both politically and financially. Norway is, as we all know, one of the largest contributors to the UN. The UN is a key partner in our work for universal values, human rights and poverty reduction. The UN is also important for safeguarding our national interests - we should not forget that, as well.

- The work of the UN system with key social and economic areas such as global health helps to create and sustain norms, boost preparedness, and increase international efforts for women’s and children’s health, as well as combating diseases. This is of great significance for public health in Norway, as well.

- And equally important: the UN is the guarantee for international law, an international order based on right, not just might. And I would like to draw particular attention to the law of the sea, which has helped safeguard our sovereignty and our resources as a coastal state and a shipping nation, with our continental shelf, and oil, petroleum and fishery resources. The UN has been very important to Norway.

UN's role
It is of great importance to us that Norwegian interests are safeguarded by internationally adopted and recognised agreements and rules. International standards and rules must be established and respected, and nations must comply with them, particularly as there is no world police. The legitimate and normative role of the UN is crucial.

So the UN is both important to and beneficial for Norway, for our national interests as well as for our international engagement for human rights, peace and security; for combating hunger and need when fellow human beings in other countries are hit by humanitarian crises, and assistance becomes a moral imperative.

Thus the UN and the global dimension are a key element of our foreign policy, alongside the transatlantic alliance, the High North and Europe. The UN is in a unique position to harmonise common interests; it is the universal arena for reaching agreement on common goals and measures. This also applies to the work on the Millennium Development Goals and the post-2015 agenda, a priority for this year’s General Assembly.

I would like to draw attention to three important points:

First: We must give top priority to achieving the Millennium Development Goals by 2015. These eight goals have helped to focus international efforts, mobilise resources and produce results. Much has been done, several goals have been achieved: Notably, the proportion of people living in extreme poverty has been halved. We intend to build on these results to ensure success when it comes to maternal and children’s health, diseases, nutrition and education. Although we have reduced the number of children who die every year by nearly a half, there are still more than six million tragic deaths every year. We should remember that as we take our important work forward.

Secondly: We will seek to ensure that the new goals are concrete and measurable, as the Millennium Development Goals are. The new goals must be relevant to today’s challenges and there should not be too many of them. They must be sustainable, with equal priority given to the social, economic and environmental aspects, as agreed at the Rio+20 Conference last year. There is broad agreement in the UN to draw up a coherent set of goals, and a framework for development after 2015, that focuses on sustainable development and the eradication of poverty.

Norway will emphasise the need for mainstreaming environmental considerations, human rights, democratic governance and the rule of law throughout the post-2015 development agenda. Women’s rights must be a mainstay, with specific goals and targets, for instance on combating child marriages and violence against girls and women.

Norway will take a leading role in this important work. The same applies to promoting global health and combating child and maternal mortality.

My third point is that the new agenda for development must be universal, reflect the new global reality, and promote a new global partnership in which civil society, the private sector and new funding sources are included, and where all countries – from both the North and the South – take on new commitments.

Official development assistance, or ODA, will continue to be important, particularly in fragile and in low-income countries affected by conflict. ODA is essential as a catalyst for good governance and investments, so the private sector can also play a key role in economic development.

Contribution to business development
I would like to emphasize the importance that we put on private sector development. It is crucial that opportunities are created so that people in developing countries can work their way out of poverty. Aid cannot simply subsidize services in poor countries. Aid must also contribute to business development and a more enabling environment for entrepreneurs, and governments in developing countries bear a responsibility in making this possible.

Furthermore, ODA cannot be a substitute for bad governance. It should support and assist governments that promote sustainable economic development, good governance and human and equal rights.

Norway will work to ensure that we who are members of the OECD continue to provide a high level of development assistance. We will also seek to ensure that we in the North take on new commitments for ourselves, for instance in reducing pollution, and lifestyle diseases and the waste that we can see in many of our countries, especially the waste of food.

At the same time, we expect developing countries, emerging markets and growth economies to give greater priority to the vulnerable and the poor in their own countries, to provide basic services such as health care for all, to increase public sector revenue through taxes, and to fight corruption and illicit financial flows.

Transparency and predictability are vital for attracting investments and sustainable economic development. The same applies to gender equality and women’s participation in politics and economic life. These elements must be included in a meaningful global partnership.

The post-2015 agenda
Designing new and sustainable development goals for the post-2015 agenda is a priority for our Government. We have seen how effective the MDGs have been since 2000 in mobilising efforts and achieving results in the areas that are important to Norway.

We will continue to be actively involved, politically and diplomatically, in developing new goals, in cooperation and in alliance with member states and other actors from the North and the South.

We will, of course, be actively engaged in promoting progress and finding solutions in other important, parallel multilateral processes, the UN climate negotiations or what is happening in the trade field. Progress in these areas could have a positive impact on the UN negotiations and the partnership for the post-2015 agenda, and vice versa.

The Ministry of Foreign Affairs has established a post-2015 project which is responsible for coordination and policy formulation, in close contact with civil society. Its work will be important in the process ahead and for defining the national commitments we in Norway will take upon.

We will participate in all the various channels of the post-2015 framework process: the open UN working group where we share representation with Denmark and Ireland, the efforts to identify sources of financing, General Assembly debates and negotiations, and consultations involving the UN and civil society.

So we look forward to close cooperation with and input from civil society as we approach the intergovernmental negotiation process that should culminate in a new set of development goals in the second half of 2015.

Thank you so much for your attention.