-After half a year of fighting, the world's newest country is barreling toward calamity. But its leaders can pull it back from the brink -- if they choose to do so, skriver Rajiv Shah, Valerie Amos, Kristalina Georgieva og Børge Brende i en artikkel i Foreign Policy 21. august.

After half a year of fighting, the world's newest country is barreling toward calamity. But its leaders can pull it back from the brink -- if they choose to do so.

For more than seven months now, South Sudan has been at war with itself. A power struggle among members of the ruling elite has plunged the nation into a human catastrophe of alarming proportions. Three years after South Sudanese celebrated their nation's independence, they are watching their hard-won struggle for peace slip away. Those who voted for the right to make their own way in the world as a sovereign people are victims yet again -- this time to an abject failure of leadership.

Opportunity after opportunity to end the senseless fighting has come and gone. Despite the valiant mediation efforts of the region's Intergovernmental Authority on Development in East Africa and the United Nations, a cessation of hostilities signed in January and a recommitment to a peace process made in May have not been met. Deadlines pass without actions. Meanwhile, the fighting continues, and suffering worsens.

Today, a deadly cholera outbreak threatens thousands of people; more than 1.7 million people have been driven from their homes; and the looming shadow of famine grows closer every day. On the ground, our aid workers are reporting children arriving in camps with hair that has turned red -- a telltale sign of life-threatening malnutrition. More than half of the population -- 7.3 million people -- live with hunger, and 50,000 children could die this year if emergency aid does not reach them.

South Sudan now faces the worst food security crisis in the world, but even the risk of starvation has not been enough to bring about peace. Both parties to the conflict -- the government and the opposition -- have consistently blocked the movement of lifesaving humanitarian assistance, preventing aid groups from reaching the most vulnerable people by road or river. Airlifting food, water, and medicine, which is the only means to provide essential supplies in these circumstances, is not feasible over the long-term, and it limits the number of people who can be reached.

The international community is responding with vigor to this crisis, but the challenges are staggering.

Nearly half of South Sudan's people are in need of emergency humanitarian assistance.

Nearly half of South Sudan's people are in need of emergency humanitarian assistance. With the planting season lost and the rainy season underway, more than half of the country is now inaccessible by land or potentially cut off from food, water, or medical care. In April, we issued a Call for Action on South Sudan urging action on three critical fronts: an immediate end to the fighting, an increase in humanitarian funding to help people cope with the crisis, and for all parties to respect international humanitarian law. 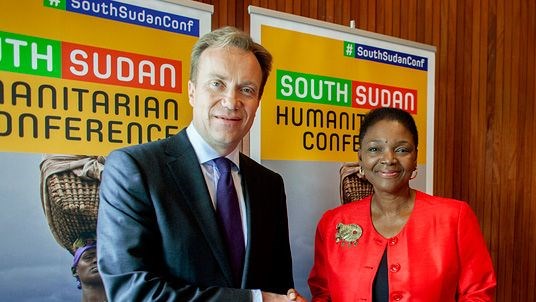 In May, we met in Oslo with representatives from South Sudan's government and the opposition. We demonstrated our support and concern with concrete action, pledging more than $610 million in new funding for both South Sudan and the region -- a tremendous level of support when emergencies from Iraq and Syria to the Central African Republic have put a staggering number of people in need of help.

A true cease-fire that leads to peace, reconciliation, and accountability is the clear path to a safer and better future for the people of South Sudan, and it is high time for the government and opposition to show leadership, make compromises, and establish a Transitional Government of National Unity as they have agreed to do. These leaders have an obligation to protect their people and to bring the country back from disaster and the brink of famine. We will continue to support such an endeavor -- delivering lifesaving assistance, supporting negotiations, and strengthening the resilience of communities as they hope, one day soon, to rebuild. Without peace, however, the toll of human suffering will only continue to grow. Enough fighting. Enough death. Enough delays. It is time to lead.