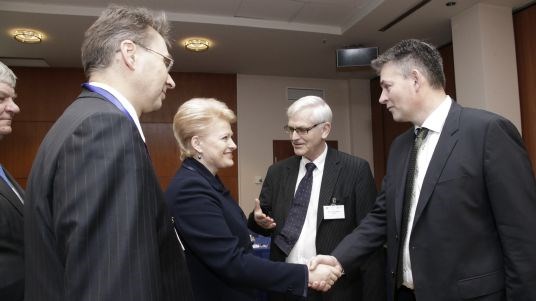 (Prof. Juras Banys, Rector of Vilnius University, President of the Republic of Lithuania Dalia Grybauskaitė, Ambassador of Norway to Lithuania Leif Arne Ulland and State Secretary of the Norwegian Ministry of Education and Research Bjørn Haugstad at the conference. Photo:Džoja Gunda Barysaitė.)

First, let me take this opportunity to thank the Lithuanian Presidency for organizing this important conference and for the inspiring opening and key note we’we just heard.

I’d also like to thank the organizers for inviting me to address you on the still pressing topic of gender balance in research and innovation.

I am pleased that Norway is a partner in this important project through the European Economic Area and Norway Grants. Through the Grants, Norway, Iceland and Liechtenstein facilitate social and economic development in Europe and strengthen our cooperation with the 15 EU countries in Central and Eastern Europe.

For the period 2009-2014, almost €1.8 billion has been set aside under the Grants. Funding is channelled through 147 programmes. All the programs reflect our shared values and responsibility to promote human rights, good governance, sustainable development and gender equality

Equity between women and men is a fundamental right. It is also a necessary condition for economic growth and greater social cohesion. However, equal rights and opportunities is a goal we have yet to achieve throughout Europe and beyond. A lot remains to be done in order to integrate the gender equality perspective into all policy areas.

Gender imbalance in research and innovation is a regrettable fact. Failing to make full use of the talent of a population is detrimental to economies and societies in general and to research organizations in particular.  Lack of gender equity is thus waste of valuable resources.

Furthermore, it makes a positive difference to a team when men and women are more evenly represented. A wider scope of knowledge and perspectives is taken into account. This is important for nourishing an innovative environment. Thus, gender balanced recruitment will increase the quality of research by increasing the knowledge resources.

However, my message today is simple and optimistic: Policy matters! We just have to keep on addressing imbalance issues from many angles and on all levels.

Let me start with the somewhat intangible matter of attractiveness. Although girls and young women have the same ability in science and technology as boys and young men, they tend to put more weight on relevance, and to want a career that makes a difference to people and society.  An introvert culture and communication style may therefore discourage not only young women, but also many young men with broader perspectives. Thus the sciences, and the educational institutions, may benefit from a change in the way they communicate externally and the way the subjects are taught, so as to better attract and retain female students.

Much is also to be achieved by active leadership engagement in gender balance. At the Norwegian University of Science and Technology the number of female applicants to technology masters studies has risen by 60 percent in the years from 2005 to 2013. In several of the traditional engineering programmes, like civil engineering or petroleum engineering, gender balance among the students was achieved this year. And it is worth noticing that women systematically constitute a larger share of the accepted students than they do of the mass of applicants.

To give you another example – and now I move from the student level to the top level of professor: In 2012 The University of Tromsø – the Arctic University of Norway had 28, 5 percent female professors, a rise from 12, 1 percent in 2003.

With regards to competitive research funding other policy measures have proven to be effective. Let me give you some examples.

NORKLIMA is a large programme in the Research Council of Norway on climate change and its impact. The Research Council has not been satisfied with the gender balance within this programme, with only 14 percent female project leaders in 2011 and 18 percent in 2012. Thus, they decided to announce the possible use of moderate affirmative action in their new call for funding. “Assuming all other quality-related factors are equal, [...] during the final processing of grant applications: […] Projects led by a woman project manager will be viewed in a favourable light.”

No affirmative action was then needed. A much larger share of applications than usual was sent from female applicants, and four out of nine approved applications held women project leaders.  It seems that the explicit announcement itself, stating the possible use of moderate affirmative action, helped inspire and increase the share of women applicants. And thus the share of women project leaders doubled in two years, to 29 percent in 2013.

The Research Council of Norway has established a programme initiative, in Norwegian called BALANSE (BALANCE), aimed at improving gender balance in senior scientific positions and in research management. The initiative also aims to strengthen gender balance efforts within research institutions and to enhance research-based knowledge in the field.

A couple of weeks ago the programme awarded its first project funding. Three independent research institutes and one university can now implement new gender equality activities.

Let me end by saying that I look forward to following the results of the GEIRICA project and I wish you a successful continuation of the conference. Thank you very much.