Thank you for the invitation to speak here today. The seminar topic (Portugal's labour market – towards the Nordic Flexicurity model?) is of great relevance for all countries. Labour and human capital is our most valuable resource and main source of economic and personal welfare, said State secretary Roger Schjerva. 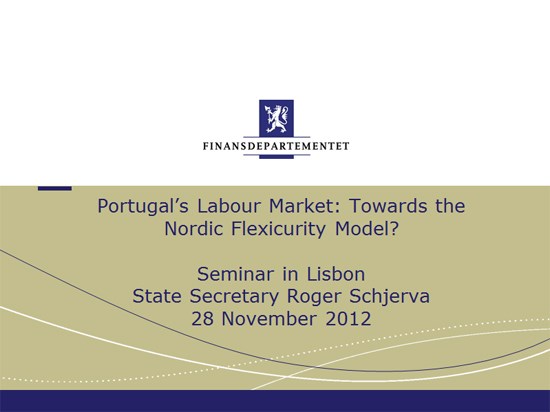 Thank you for the invitation to speak here today. The seminar topic (Portugal's labour market – towards the Nordic Flexicurity model?) is of great relevance for all countries. Labour and human capital is our most valuable resource and main source of economic and personal welfare.

Many countries are facing a very challenging situation after the global financial crisis. Portugal is hit hard by the crises. Understandably, the discussion is intense here currently. I support all the good work that has been done and is going on from the people, the social partners, the Parliament and the government, to overcome the economic and social crises. In Europe, the level of unemployment remains at very high levels and in some cases is still on an increasing path. In some countries close to half of the young people under the age of 26 are unemployed. With severe budget constraints, many countries now have limited room for manoeuvre.

The Nordic countries have performed quite well over the last 15-20 years, and shown capacity to adapt to external shocks even in the aftermath of the financial crisis. Our countries are characterized by high levels of income and employment, and low inequality. I believe that the relatively favourable performance is in part due to our welfare model. Let me suggest a few characteristics of the so called Norwegian model:

In the following I will elaborate on some of these characteristics; before what is the main challenges for this model and is the model exportable?

To many, Norwegian welfare is associated with our oil resources. A hundred years ago, Norway was among the poorer countries of Europe. By 1950 Norway had caught up with Western Europe. Today, Norway ranks among the richest countries in the world. GDP per capita is among the highest in the world. Large income from natural resources, such as hydroelectric power, fisheries and since the beginning of 1970-ties petroleum, explains part of the rapid economic growth. 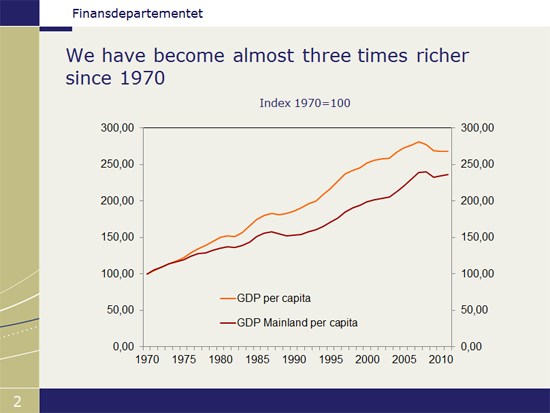 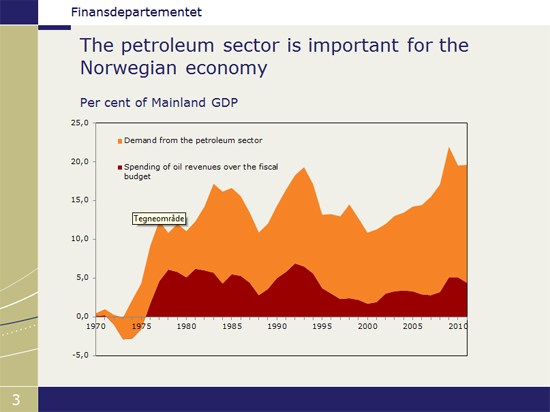 As illustrated in the chart 4, labour is by far the largest component of our national wealth. The value of our work today and in the future amounts to 85 percent of total national wealth according to the figures. Therefore, future growth and prosperity first and foremost depend upon our ability to develop and use our human capital. 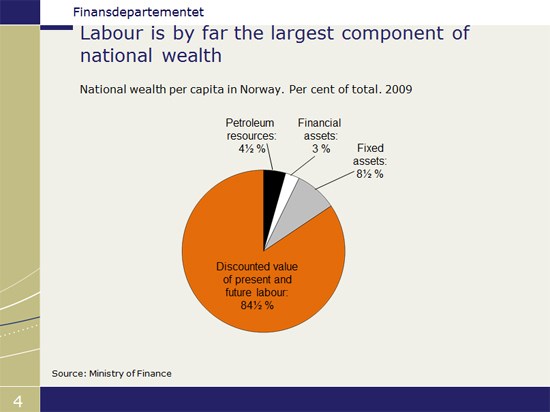 The main explanation to Norwegian wealth is to be found in the high productivity growth combined with high employment rates. How have we managed to combine economic security with high economic performance, including high labour market participation and low unemployment? 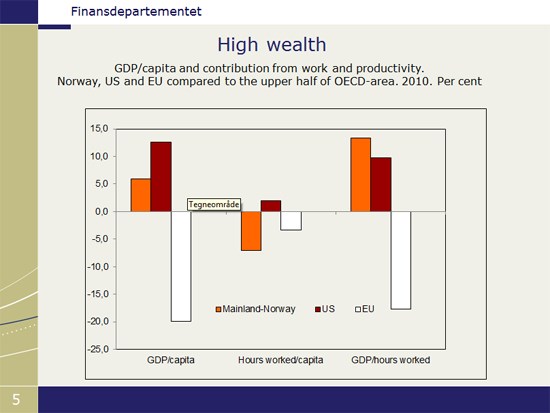 All Nordic countries have been successful in mobilising labour forces. In particular, the Nordic women have migrated into the labour market over the last 40 years. In Norway, female labour force participation increased from 50 per cent in the beginning of the 1970-ties to 76 per cent in 2011. On the other hand, measured by hours worked, the labour participation is not that high. A high share of part-time work among women is one explanation. Another explanation is a gradual lowering of the general working time. The higher GDP per capita that has materialised of the high productivity growth, has to some degree been used to lower hours worked. 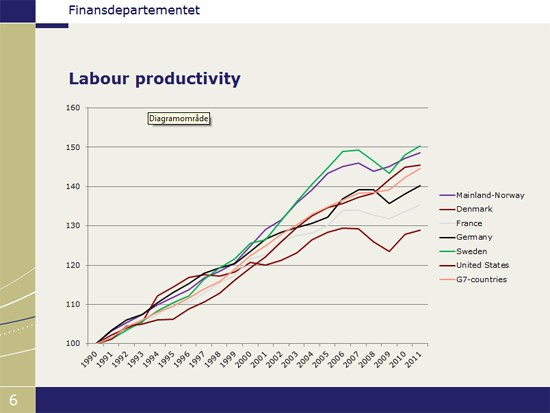 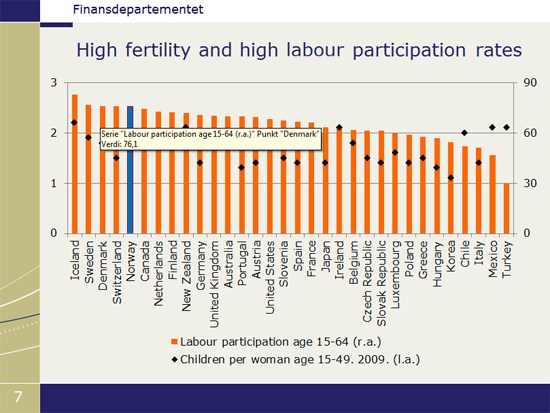 A main conclusion from this, is that family reforms, which traditionally have been regarded as pure welfare policies, also can have significant economic benefits. 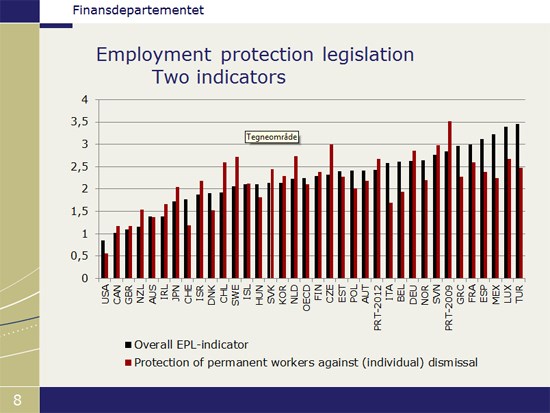 It is symptomatic that the OECD – known for their hard core economic analysis, recently has pointed this out in various reports.

- rather flat income distribution with strong preference for equality

The Norwegian welfare model is effective – not only in securing welfare services to the public. It also contributes to labour participation, flexibility and high productivity. 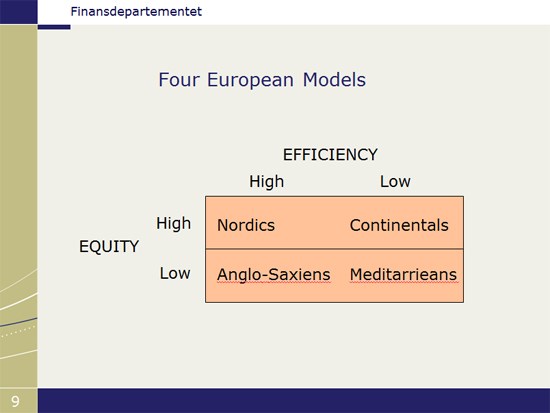 Ambitious welfare and family policies have been instrumental in supporting the participation of women into the labour market. All Norwegians have a statutory right to day care facilities for their children. In addition they are entitled to one year's paid parental leave – divided between the mother and father. This is one of the reasons why we maintain one of the highest fertility rates in Europe, close to 2 per cent compared to the EU average of around 1½. 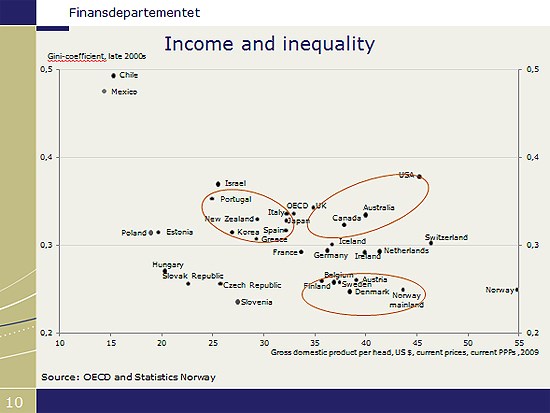 Safety nets may promote a sense of security that have made workers more open for changes in industrial structures and thus increased the economy's ability to adapt to changes. Together with an open economy, flexible labour markets and our specific production structure, this has helped us reap the benefits of globalisation.

A well functioning social security system, including an unemployment scheme, has made the economy less vulnerable to economic shocks because it has supported a flexible labour market and made it easier to carry out downscaling without large social costs and conflicts. However, it is vital that income benefit systems are designed in such a way that they stimulate job searching and labour market flexibility in general. 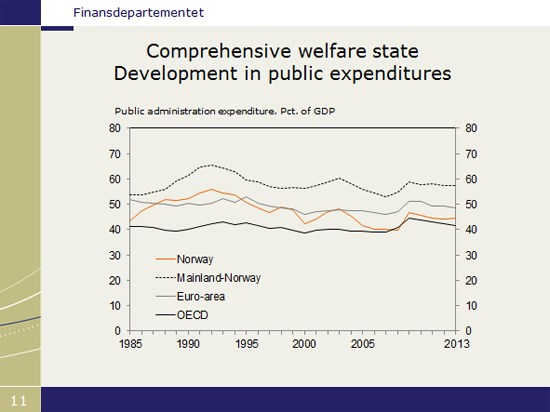 Tripartite cooperation between the social partners (unions and employers) and the Government has a long tradition in Norway.

A close tripartite cooperation may play a role to keep a well functioning labour market, in spite of obvious interest conflicts. The origin of this cooperation is centred on our system for wage formation. Wages are set in highly centralised negotiations between a few big unions and employers. Given their size, unions have an incentive to take into account the impact of wage increases on unemployment. In order to avoid increased unemployment, overall wage growth has by and large been restricted to what export-oriented industries can pay and remain competitive. Also, it facilitates an emphasis on common interests and a fairly equal distribution of income. The cooperative quality of our system has been instrumental both in times of crisis and when dealing with long-term structural issues. Capital and labour in the Nordic countries are to a large degree put to use where they offer the highest return. In combination with comprehensive income insurance schemes and ambitious active labour market policies, that has made the labour market more flexible.

Furthermore, there is a relatively weak relation between parent's and children's income, which implies a high degree of social mobility. The main variables explaining that, are some of the same characteristics that I already have mentioned above; Full coverage of pre-school for the age group of 3-6, a common basic education for everyone from the age of 6 to 16, tertiary education free of charge and a public system for giving grants and loans to all students ensuring that their ability to study is independent of parent's economy. Measures that aim at increasing the human capital, often gives a double dividend by equalizing the income distribution, while at the same time increasing growth.

Contrary to American textbooks/conventional wisdom, the Nordic experience indicates that comprehensive risk-reducing welfare systems may stimulate growth and employment. Despite a rather even income distribution, enrollment in higher education is good, and despite a tax-financed welfare state, labour participation is high. We have trade unions, relatively high taxes, and a high degree of equality. However, our economic performance is still good. 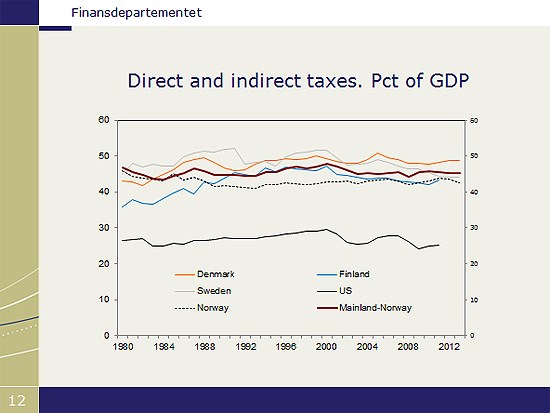 I believe the heart of the matter is the combination policy tools, with a strong focus on dialogue with the social partners, social safety nets, open economy, gender equality which promotes family policies aiming at strengthening female participation in the labour market and substantial redistribution through an effective tax system.

In my view, emphasis on building consensus is strength of the Norwegian society. It has not always been like this. In earlier times, the level of conflict was much higher. The social partners often play an important role in consensus building. It involves taking time to study and search for solutions, to hear everyone's views and to try to find compromises.

But the model faces challenges. Some challenges we have in common with other countries, while some may be specific. An aging population, more globalized markets and a better integration of immigrants are the major ones. But the overall challenge for the future is to maintain high labour force participation. This is decisive for several reasons. First of all, is allows us broadest possible tax base. Through that we are able to finance the welfare system and public services. Secondly, high levels of labour participation imply less inactive people on public transfer schemes. Thirdly, seen from the individual perspective, having a job contributes to higher personal income, to social inclusion and to better personal health.

The share of citizens past the official retirement age to those of working age will rise rapidly in the years to come. Of course the prospect of better health and longer life is a good one. It is a product of our wealth and welfare. So are lower fertility rates. But these trends in combination pose a challenge to the welfare state and the sustainability of public finances. Similar to many other countries we have recently introduced a comprehensive reform of the public pension system to meet the future challenges. The reform will strengthen work incentives in the system.

In addition to secure a large and educated work force, the sustainability of our economic model depends on our ability to keep discipline in fiscal policy, like any other country. The petroleum resources give us a fiscal leeway different from most other countries, but it is crucial to keep on adapting to changing circumstances and new needs both in the private and the public sector. If the petroleum wealth is allowed to become a cushion against change, the wealth is easily spilt. 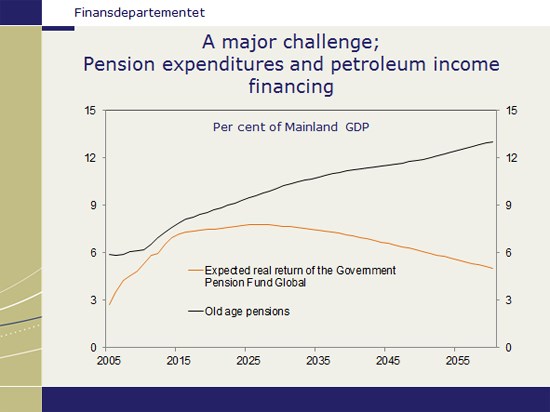 Another specific challenge is that almost 20 per cent of the working age population in Norway is not part of working life, but recipients of health benefit. A generous sickness benefit scheme is an important part of the system, but at the same time it probably explains the very high sickness number compared to other European countries.

But overall, Norway has a well developed society and a sound economy. But as I have stressed; it has taken time to develop from one of the poorest countries in Europe hundred years ago to become one of the richest. And we have important challenges ahead. An interesting question is if the Norwegian model is tradable to other countries?

Features in Nordic countries such as small and rather homogenous populations, large degree of openness to international trade, affluence of natural resources play a role in the development of our economies. But above all, we have trust – among the labour market partners, the government and the people. This is a prerequisite for several of the traits characterizing the Nordic model. It also makes it easier for us to open up for globalization, yet another reason for our success the past decades.

Thus, I would not venture to say that our system can be transplanted as such to other countries elsewhere. Every country has its own characteristics and history which influence what it possible and desirable.

But some elements may well be both desirable for other countries to import, such as more active labour market policies and flexible labour market regulations. The present challenges in international labour markets, with huge and growing youth unemployment should put such measures high on the agenda.

To sum up, my three main points are, making them into somewhat tabloid slogans;

2) Support production as such, don't support a specific product

We have speakers from Portugal, Norway and other Nordic countries on today's programme. I hope that this seminar will be an opportunity to exchange views on how the labour market best can be organised, and how it interacts with other policies.