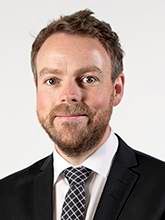 Ministry of Labour and Social Affairs

Member of Parliament (Stortinget) representing the county Telemark and the Conservative Party from 2009.

Member of the working commitee for the Conservative Party from 2010.

Journalist in the local newspapers Varden and Porsgrunns Dagblad.