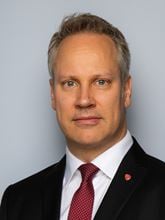 Minister of Transport Jon-Ivar Nygård is responsible for policies relating to the transport of people and goods and postal services.

Prior to that he was mayor of Fredrikstad from 2011 and sat on the city council from 1993. Nygård has held several positions in the Labour Party and in elected bodies. He sat on the Labour Party's national board in the period 2003–2004 and has been a member of the central board of the Labour Party since 2014. He has been elected to the Storting as the representative for Østfold during the period 2021–2025. Nygård has a master's degree from the University of Oslo and Østfold University College with studies in history, social economics and political science.