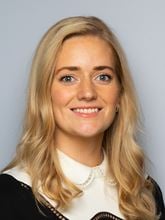 The Minister of Justice and Public Security is responsible for the judicial system, the correctional services, the police and prosecuting authorities, asylum and immigration, civil protection, preparedness and the Polar areas.

Enger Mehl completed a graduate law degree at the University of Oslo in 2017, and was a trainee lawyer at the Elden Law Firm before being elected to Parliament.

She was born in Lørenskog, Akershus County, but grew up in Hedmark County, where she was active in Centre Youth. From 2015 until 2017, she was a member of Hedmark County Council.