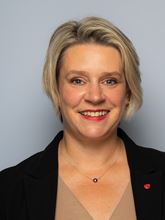 Ministry of Labour and Social Inclusion

Ms. Persen was Minister of Petroleum and Energy from October 2021 to March 2022. She was elected to the Norwegian Parliament for the Labour Party from Hordaland county in 2021. Prior to this, she was Mayor of the city of Bergen (2015 – 2021).