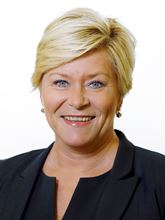 The Minister of Finance has a main responsibility for national economic policy and co-ordinates the preparation of the national budget.