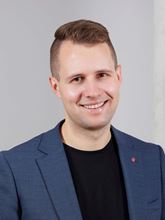 Kai Steffen Østensen was on 18 October 2021 appointed as Political Adviser for Minister of Health and Care Services, Ingvild Kjerkol. Østensen holds a bachelor’s degree in Social Planning and Communication from the University of Agder, specialising in gender equality studies. He has held several public positions, including as the head of Agder and Telemark Diocesan Council. Østensen has also held several political positions in the Norwegian Labour Party, most recently in the Agder County Council.