- This year it is exactly 100 years since Norwegian women were given the right to vote on an equal footing with men. And about time too, is our reaction today. But at the time it was a real milestone, Jens Stoltenberg said in his New Year Address. 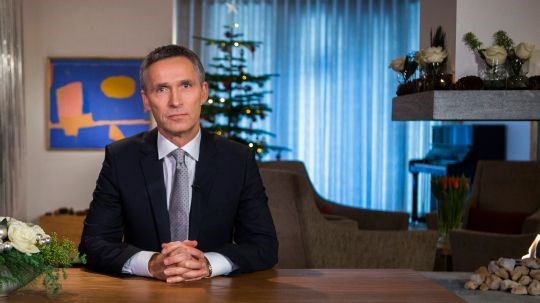 This year it is exactly 100 years since Norwegian women were given the right to vote on an equal footing with men.
And about time too, is our reaction today.
But at the time it was a real milestone.
And it marked the start of an exciting new chapter in our country’s history.
Over these 100 years, the development of equal opportunities has fostered hope, inspired dreams and renewed our belief in a better society.

And this year we are going to celebrate all this!

And we will commemorate all those women who led the way, who demanded their right – which is now taken for granted – to make their own decisions.

One of them was Fernanda Nissen,
a respectable member of the middle class who led the match workers’ strike in 1889,
and who had a ready answer to the assertion that women were not suited to politics.
”Utter nonsense”, she would retort.

Grete Waitz was another,
a sporting legend who gave us some truly magical moments,
a woman who pushed boundaries.
Grete Waitz showed girls and women all over the world that no race, no marathon is too long.

Gro Harlem Brundtland made history when she formed her “women’s government” in 1986.
Eight of the eighteen ministers were women.
This breakthrough was celebrated at a girl’s school in Japan with a reading of the poem “The Day the Mountains Move”.

However,
the greatest mountain moved more quietly.
For the most important change has been that women can finally decide for themselves
whether to work in the home or go out to work.
During the course of a 40-year period, 600 000 women ventured into the world of paid work.
Today, the majority of students studying traditionally high-status subjects like Law and Medicine are women.
Education was and still is a key to freedom of choice for women.
It is the key to their future.
It is therefore very good news that Norwegian schools – and our teachers – are now performing better in international surveys.

A good school system is thus helping to forge one of the world’s most egalitarian societies.
#

With courageous women as our role models, we should dare to have a bold vision for Norway:
an inclusive, secure country of equal opportunities.
A society made up of five million individuals – woven together, through mutual trust, into one nation.

The contract is a simple one.
Everyone must contribute according to their ability, and everyone will get what they need.
Freedom and security – created by the community – is our country’s magic formula.

The Americans have their American Dream. We have the Norwegian model.
Our model may not sound as exciting, but it makes up for this by providing security.
In a society where freedom goes hand in hand with security, more people are able to realise their dreams.

What I am saying is this:
It is easier to realise the American Dream in Norway than it is in America.
We should be proud of this. And we should uphold the principles that make it possible.
Because this is what makes Norway what it is.
It makes us who we are.
But we should not assume that it will always be like this.
Or that our model can be maintained without effort.

The strength of Norwegian society lies in the fact that everyone makes a contribution.
No one can just make demands.
Everyone has to ask themselves – how can I contribute?
If we allow anyone to shirk their responsibility,
for example by evading tax,
cheating the social security system,
or giving themselves huge pay rises while others have to show moderation,
the glue that holds our society together will come unstuck, and our trust in one another will be weakened.

Norway is not a perfect country, but it is a good country.
Many other countries in Europe are now going through a crisis. We are enjoying growth.
We are conducting more research,
we are engaged in more development and innovation,
and we are creating new enterprises.

Norway is moving in the right direction.

Now to an issue that is particularly close to my heart.
Every minute, somewhere in the world a woman dies in childbirth.
This is one of the most brutal illustrations of discrimination against women that I know of.
And every five seconds, a child dies.
A child whose life could have been saved.

This is why Norway has, for many years, spearheaded efforts to ensure access to cheap life-saving medicines.
And we will keep up these efforts, for they are producing extraordinary results.
Small jabs are giving millions of children the gift of life.
Simple medicines can save their mothers.
The fact that all these mothers’ and children’s lives can be saved is – as I see it – a miracle of our time.

Just before Christmas, eight health workers were killed while vaccinating children in Pakistan against polio.
They were killed because there are extreme fundamentalists who want to prevent the vaccination of children.
This is beneath contempt.
These brutal killings reflect a total disregard for human life, they are expressions of intolerance and they represent a rejection of knowledge and progress.

The year that we are now leaving behind brought us both encouraging and alarming news about poverty and climate change.
We received a serious wake-up call from the North Pole.
The ice is melting at a rate even the worst pessimists were not prepared for.
But at the same time there were good tidings from the UN in New York.
The world has achieved what is possibly the most important of the UN Millennium Development Goals: halving the proportion of people living in extreme poverty.

This shows that our efforts are paying off.
When the whole world stands together, we can achieve real results.

Now we have to do the same in response to climate change.
This is why Norway will be intensifying its efforts to combat climate change this year.
The world desperately needs a climate change agreement that inspires hope.
We want to be at the forefront of efforts to achieve just that.

But we must also take action while the negotiations are under way.
We must provide the necessary first aid. We must:
– reduce emissions,
– save forests.

I have confidence that the world can do this.
We must believe that we can.
And – here too – we must pull together.

Here in Norway, a number of brave people made a mark last year.
One month ago, 22 women and men were awarded the Medal for Heroism for the courage they showed when Norway was hit by the terrorist attacks in 2011.
Each and every one of those who arrived at the scene alone and ahead of the others had to take a decision.
It was a matter of life and death.
Others’ lives.
Their own lives.
Without helmets or bullet-proof vests they crossed the threshold of fear.
With their own hands they saved lives.
In honouring them, we are honouring mankind’s deep-seated will to do good.

The 23-year-old Sami woman Eli Anne Nystad is another example of courage. She was harassed by a gang of boys who tried to set fire to her.
She did not let them get away with this.
Instead of giving in, she confronted her tormentors publicly.
Eli Anne turned personal humiliation into a campaign against bullying.
And became a role model.

Another role model is 15-year-old Juliane Asdal from Tromøy.
She could no longer stand just witnessing the severe bullying all over the Internet.
She started the “Stop it” campaign on Facebook.
This campaign now has supporters from all over Norway.

I agree with Eli Anne and Juliane.
No one deserves to be bullied.
And no one should be able to threaten others without facing consequences.
This is why the Government wants online hate speech to be punishable.
In the spring we will present a bill on this matter to the Storting.
But remember – we are all responsible for standing up against bullying.

My personal role model from 2012 is seven-year-old Even from Salangen.
This brave boy resolutely clung to life following a terrible inferno two years ago, but the injuries he sustained were so severe that we can hardly bear to think about them.
Even and his family could have sunk into hopelessness.
But instead they found the courage to overcome their grief and pain.

You have reminded us of the true value of life.
I wish you all the best.

Again this year, there are many Norwegians who are engaged in peace efforts around the world and are celebrating the New Year far from home.
Soldiers. Aid workers. Health workers.
We extend a warm thank-you to you all.
And we remember those we have lost.
In March, five of our officers were killed in a tragic plane crash at Kebnekaise during the NATO exercise Cold Response:
Lieutenant Colonel Truls Audun Ørpen,
Captain Bjørn Yngvar Haug,
Captain Ståle Garberg,
Captain Siw Robertsen and
Captain Steinar Utne.

We received the news of their deaths with deep sorrow.

On the first day of the New Year, our thoughts go to our much loved royal family.
Last year we celebrated The King and Queen’s double 75th birthday.
Today, we thank them for another year of outstanding work for Norway.

I would also like to thank all those who are on duty this New Year’s holiday.
the nurses and the firemen,
the snow plough drivers, and the pilots guiding ships safely into and out of harbours.
And many others.
Thank you for taking care of these vital tasks while the rest of us are celebrating.

I would like to send a special greeting to each and every police officer out on patrol this New Year’s Eve.
You, with your knowledge and courage, are responsible for keeping us all safe. We thank you for this.