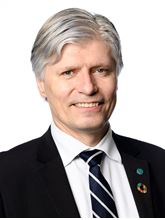 The minister of Climate and Environment has a particular responsibility for carrying out the environmental policies of the Government.

Ola Elvestuen was born on the 9th of October 1967, at Vestre Toten, in the county of Oppland. He spent his childhood at the small town of Eina.

Elvestuen holds a Bachelor’s degree from the University of Oslo, having studied Social Anthropology, Political Science and History. He started a major in History. He has undertaken leadership training at the Norwegian Defence College.

Elvestuen was first elected to the Oslo City Council in 2003, and headed the City Development Committee from 2003 to 2011. He was city councillor for Environment and Transportation in Oslo during 2011-2013.

In 2013, he was elected to Parliament, from Oslo, and he was re-elected in 2017. He has since 2013 chaired the parliamentary Committee on Energy and Environment.

On Friday the 17 of January, he was appointed as Minister of Climate and Environment.