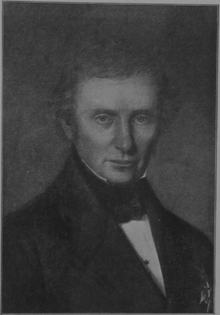 Jørgen Vogt was brought up as one of 13 siblings in simple conditions at Kongsberg, where the family moved after the father had sold his timber trade at Bragernes. After grammar school Vogt was sent to an uncle in Copenhagen for further studies. He passed university qualifying exams in 1800. The following year he became a clerk at the Finance Collegium (Ministry of Finance) in Copenhagen, combining this with his law studies.

Vogt had his law degree from the University of Copenhagen in 1806, and was appointed senior clerk in the Finance Collegium. When his father, who had become district stipendiary magistrate of Nordfjord in 1803, died in 1809, Vogt succeeded him. Three years later he returned to Copenhagen, where he was appointed judge and archivist in the Finance Collegium.

After the Peace Treaty of Kiel in January 1814, where Norway was transferred from Danish to Swedish sovereignty, Vogt offered his service to Prince Christian Frederik. This led to him becoming member of the finance committee of the National Assembly at Eidsvold that spring. In October 1814 he became acting chief of 1st Ministry (finance affairs) until the union with Sweden was established in mid-November. He was then appointed director general at the ministry. In early July 1822 Vogt was appointed state secretary, chief of the central government office – the State Secretariat – in Christiania.

During the First Wedel Government (1814-1836) Vogt was in September 1825 appointed councillor of state and chief of the Ministry of the Army from October  that year. He now entered a 33-year-long career as government member, only interrupted by a seven-year leave 1829-1836 as member of the Law Commission. As member of the Norwegian Council of State Division in Stockholm he was also acting prime minister from September 1827 to July 1828, between Mathias Sommerhielm – who was ill and passed away in November 1827, and Severin Løvenskiold.

During the Second Wedel Government (1836-1844) Vogt returned as councillor of state in November 1836, as chief of the Ministry of finance from December 1836.

During the Løvenskiold/Vogt Government (1844-1856) – named after Governor-General Severin Løvenskiold and Vogt himself – Vogt was one of the most experienced councillors of state. In 1845 he was impeached for provisional laws that the Storting claimed to be in conflict with its rights, but was acquitted – his defence counsel being later prime minister Frederik Stang. The conflict was due to Vogt’s role as a guardian of the Government’s authority in a time when the Storting’s role was increasing.

When First Minister Nicolai Krog resigned in January 1855, Vogt succeeded him. That is why the next government carries his name: the Vogt Government (1856-1858).

After criticising military appointments made by the Viceroy, Crown Prince Carl in 1858, Vogt was requested to tender his resignation. This was also due to the fact that the Crown Prince wanted County Governor Christian Birch-Reichenwald and his supporters in the Government. Vogt then resigned in early December 1858. His  resignation released sympathy also among his political opponents.