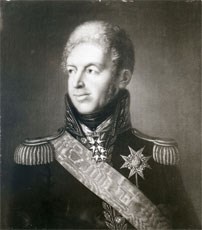 August Sandels had a long military career when he in 1818 became the third Swedish governor-general in Norway since 1814, at the age of 54. He was born a commoner, but his father was raised to the peerage in 1772. August Sandels was ennobled in 1809 and made a count in 1815.

Sandels had a military education and became an officer in 1777. When Sweden declared war on Russia in 1788, to regain the lost Finnish provinces, Sandels was major and commander of a battalion of the Karelian Dragon Regiment. He won several battles, but Sweden suffered a defeat in 1790. In 1799 Sandels was appointed colonel.

When war broke out in Finland again in 1808, Sandels won several battles with the Russians. After a battle at Kuopio he was appointed major general. At the peace treaty of 1809 Sweden lost Finland, and Sandels became president of the War Collegium and second in command of the Swedish Life Guard.

Sandels was now appointed lieutenant general and governor-general of Pommern (Pomerania), and was given command of part of the Swedish army fighting Napoleon in Germany. He participated in the invasion of Holstein, which led to the peace treaty in Kiel in January 1814 – where Norway was transferred to Swedish sovereignty. He was then given command of a part of the troops being sent towards Norway.

After the short Swedish-Norwegian war in the summer of 1814 was over, Sandels was acting county governor of Stockholm. During the estates assembly in 1817 he was leader of the nobility’s meetings. In 1818 he was given the title ”One of the Lords of the Realm” (“En af Rikets Herrar”) and appointed general.

When Crown Prince Carl Johan succeeded King Karl XIII in 1818, he found it necessary to replace the Swedish Governor-General in Christiania, Carl Mörner. In October 1818 he chose Sandels to succeed Mörner. Sandels went to Norway for a short visit, but was allowed to remain in Stockholm until May 1819.

In Norway Sandels spent most of his time in Christiania, but he visited Bergen in the summer of 1819. He was well received. Norway was in a serious economic crisis, as debt negotiations with Denmark were difficult and expensive. Sandels worked actively to promote the King’s views, and gradually came to be regarded as an intrigant by political circles in Christiania. In particular he fell out with the Minister of Finance, Count Herman Wedel Jarlsberg, who accused Sandels of behaving like a schoolmaster.

In Crown Prince Oscar’s period as viceroy in Christiania, from April to November 1824, Sandels was temporarily on leave from his post as governor-general. Before returning to Christiania he was appointed field marshal. He now saw fewer conflicts with the Norwegian Government, probably due to the fact that Wedel had left the Government.

Sandels let the Norwegians celebrate their Constitution Day, 17 May, which caused King Carl Johan’s disapproval. When Sandels failed to report to Stockholm that a theatre performance in Christiania on Union Day - 4 November, in 1827 had been interrupted by hissing, he was told that the King was dissatisfied with his attitude. He tendered his resignation, which was quickly approved.

In Sweden Sandels is remembered as a major war hero. In a comparison of him and his two predecessors as governor-general, Carl Mörner and Hans Henrik von Essen, it has  been said that Sandels found a middle course between Essen’s stubbornness and Mörner’s straightforwardness.