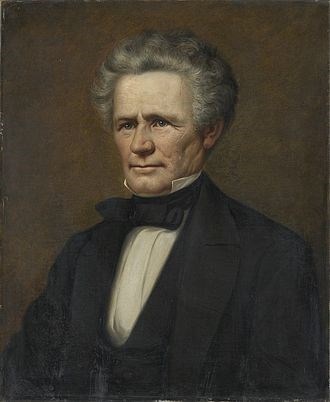 Councillor of State 17 June 1856-16 December 1858, Chief of the Ministry of the Interior. Member of the Norwegian Council of State Division in Stockholm August 1858.

Christian Bretteville started his law studies in 1821, achieving his degree from the University of Christiania in 1826. He was engaged as a clerk in the Ministry of Finance in 1828, was appointed head of division in 1831 and director general in 1839. In that capacity he was chief of the Ministry’s interior department, and from 1840 of the finance department.

Bretteville was member of Christiania's city council 1839-1842, council chairman 1841-1842 and from 1842 mayor. During his time as mayor Bretteville was also chairman of the board of Christiania Savings Bank, a post he used to the advantage of the city. At his initiative the bank supported the rebuilding of Our Saviour’s Church (Oslo’s Lutheran Cathedral) and Christiania Theatre. Major municipal reforms in his period was the introduction of gas lighting, an agreement with the National Hospital on the hospitalisation of poor people, and the introduction of municipal posts of relieving officer and city engineer.

In 1848 Bretteville was elected to the Storting for Christiania, and two years later he was appointed councillor of state and chief of the Ministry of Finance in the Løvenskiold/Vogt Government – where Jørgen Vogt became the senior minister in Christiania and Governor-General Severin Løvenskiold was the King’s representative. Norwegian prime minister in Stockholm was Frederik Due. Bretteville alternated between service at the Norwegian Council of State Division in Stockholm, and the service as chief of a ministry in Christiania - in the Ministries of Finance, the Interior and Auditing.

When the Vogt Government took over in June 1856, Bretteville continued – now as chief of the Ministry of the Interior. Towards the end of the period he was at the Council of State Division in Stockholm. When Georg Sibbern was not able to succeed Due as prime minister at once in December 1858, Bretteville was acting prime minister in the Sibbern/Birch/Motzfeldt Government until June 1859.

Also towards the end of Georg Sibbern’s first period as prime minister, in November/December 1861, Bretteville was acting prime minister – until Sibbern was re-appointed. This was at the beginning of the long-term government named after First Minister – and later Prime Minister in Christiania - Frederik Stang.

Bretteville’s reputation after 21 years as councillor of state and as acting prime minister twice, was that he had been more of a swift and flexible administrator than a statesman and a politician.