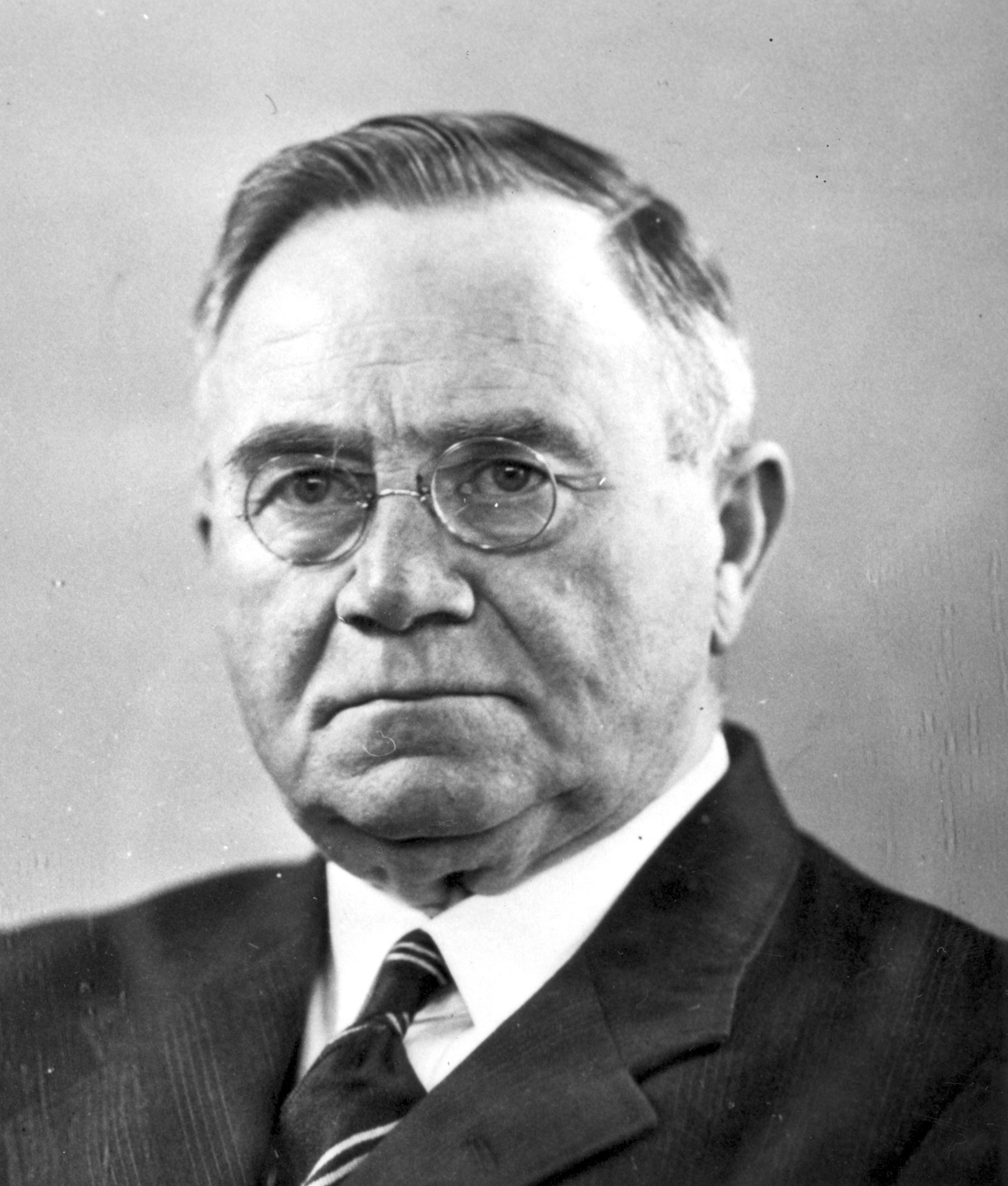 Councillor of State 28 January-15 February 1928, Chief of the Ministry of Agriculture.

Johan Nygaardsvold was born at the tenant farm Nygårdsvollen in Hommelvik in Malvik. The smallholding belonged to Karlslyst Farm and had been settled by his grandfather. Towards the end of the 1800’s Hommelvik developed into a major industrial and transport centre. As tenant farmers Nygaardsvold’s father and grandfather had duties at Karlslyst’s sawmill and brickworks in Hommelvik.

Already as a boy Nygaardsvold was involved in political activities, as his father represented the Liberal Party in Malvik’s municipal council from 1883. Both his father and his grandfather followed Norwegian politics closely, and during weekends the radical daily Verdens Gang was read aloud in the home. At the age of 12 Nygaardsvold started to work in addition to school, at the sawmill and the brickworks. Gradually he was engaged in the fight to reduce working hours from 12 hours a day.

When his father died in 1897, 18 year-old Johan took over as the family’s primary breadwinner. He moved the houses at Nygårdsvollen down to Hommelvik, and took up work as a free employee at the brickworks. Another worker there was the woman who later would become his wife, Bine Brandslet.

When economic depression in the autumn of 1901 forced the Karlslyst works to stop, newly-married Nygaardsvold did as many fellow workers and went to the USA. There he mostly worked in railway construction. The money that he did not send home, was spent on English and Swedish classical literature. In 1907 the chance had come to go home and bring his family over. But when his youngest brother died, Nygaardsvold chose to stay in Norway. In 1909 he found a job at Hommelvik Sawmill.

Nygaardsvold soon became a leader in local trade union and local Labour Party activities. In 1915 he was - against his will - nominated to the Storting elections for the Labour Party in the constituency of Strinda, and elected. 33 years of Storting and government work had started.

In his first years at the Storting Nygaardsvold did not at all enjoy himself, longing for family and friends in Hommelvik. Still, he soon became one of the leading figures in the Labour Party’s parliamentary group.

When the 1927 elections returned Labour as the Storting’s largest party, and party secretary Martin Tranmæl proposed him for the post as prime minister, Nygaardsvold refused and threatened to return to Hommelvik for good. This made the older and more experienced politician Christopher Hornsrud prime minister, while Nygaardsvold reluctantly became minister of agriculture. However, the Government was overthrown after only 18 days.

After its defeat in the 1930 elections the Labour Party shifted its political course. From having wanted to revolutionize society, the party now decided to fight economic depression and unemployment within the framework of capitalism and parliamentary democracy. Nygaardsvold became the party's leading figure, and in the 1933 elections the Labour Party gained 40 per cent of the votes.

In 1935 the Labour Party succeeded in having the Farmers’ Party (Agrarian Party) join them in overthrowing Johan Ludwig Mowinckel’s Liberal Government, and to support a minority government with Nygaardsvold as prime minister. The basis for this agreement was an emergency settlement increasing the price of agricultural products. The Government was appointed on 20 March 1935, and Nygaardsvold chose to combine the responsibility as prime minister with the post as minister of labour.

The Government succeeded in using the improved international economic situation to reduce unemployment and give people new faith in the future. Progress was made also in social politics and in education. At the 1936 elections the Labour Party got 70 of the 150 seats in the Storting.

Only reluctantly did antimilitarist Nygaardsvold give in to demands to increase the spending on Norway’s military defence, demands that towards the end of the 1930’s came both from the non-socialist side and from parts of the Labour Party. When the Second World War drew near, he became less reluctant. After the outbreak of the war on 1 September 1939, he was exempted from also being minister of labour, in order to devote all his time at leading the Government’s work.

Nygaardsvold’s hope to keep Norway neutral was shattered when Nazi Germany invaded the country on 9 April 1940. After having fled Oslo the same morning, with the Storting and the Royal Family, the Government was in the evening – at a Storting meeting at Elverum - given the authority to safeguard the country’s interests until the Storting again would be able to assemble.

After King Haakon and the Government on 10 April had rejected the German demand that former government minister Vidkun Quisling should be appointed prime minister, they spent the next two months on the run northwards while military battle was raging in many parts of the country. In late April the Government was enlarged with three advisory ministers, representing the Liberal Party, the Farmers’ Party and the Conservative Party.

When Britain, France and other allied states decided to withdraw their troops from Norway, the King and the Government accepted the offer to continue the struggle from British soil. On 7 June 1940 King Haakon and Prime Minister Nygaardsvold were among those leaving Tromsø on a British navy ship. In London the Government now established a small administration, concentrating on those parts of the administration that were most closely linked to the warfare.

On 15 April 1940 an administrative council had been established in Oslo, to cooperate with the Germans on the civil administration of occupied areas. The council had been appointed by the Supreme Court, the only remaining legal authority on the national level. Supreme Court Chief Justice Paal Berg had asked the King to support the council by asking people to be obedient to German authorities. The King had rejected this, after consultation with the Government.

When the Administrative Council was dissolved in the autumn of 1940 and replaced by an illegal German-appointed Norwegian government in Oslo, people within and outside the council began initiating a resistance group. This group, Kretsen (the Circle), later became the core of Hjemmefronten (the Home Front). The Circle sprang from groups on the non-socialist side as well as in the labour movement, partly with scant parliamentary experience.

In London Nygaardsvold received reports on plans made by these groups in Norway. In the summer of 1940 he learned that Einar Gerhardsen, acting chairman of the Labour Party as Oscar Torp was in London as Norway’s minister of finance, was in favour of a government based on the Labour Party and Fedrelandslaget (the Patriotic Association), under German occupation authorities.

In 1941 Nygaardsvold learned that the three leading members of the Circle – Chief Justice Paal Berg, former government minister Gunnar Jahn and Gerhardsen – were of the opinion that the present Storting, elected in 1936, should not assemble after the war, and that Nygaardsvold’s Government should be replaced by a coalition government. The three also meant that only two or three parties should be allowed to run for election after the war.

The Circle argued that as the Storting’s presidency was to be criticised for its handling of the negotiations on a new government in Oslo during the summer of 1940, this Storting should not meet again. And as Nygaardsvold’s Government was based on this Storting, it should leave its posts at disposal as soon as it was back in Norway.

Neither the King nor Nygaardsvold or the Government could accept this in its entirety. However, as Nygaardsvold was uncertain of the mood in Norway, and as he wanted to preserve the unity of the resistance, he said in a radio speech on Christmas Day 1942 that the Government would tender its resignation as soon as the King and the Government had returned to Norway.

Nygaardsvold hardly had any wish to continue as head of a new government. But he was disappointed at the way the acting Labour leadership had side-tracked him. Already before he was back in Oslo, the Labour Party’s national board had concluded that the Storting of 1936 should still assemble, and that a coalition government should reflect this Storting’s composition – with a non-socialist prime minister and a majority of non-socialist members. This excluded Nygaardsvold.

The Labour Party said Supreme Court Chief Justice Paal Berg should form the government. Du to his role in the establishing of the Administrative Council and the negotiations on a new government in 1940, Berg said no. The task then went to Gerhardsen, who – despite the Labour Party’s decision some weeks earlier – became prime minister in a government where the majority of the members belonged to the Labour Party and the Communist Party.

To several of the meetings of the Labour party national board in May-June Nygaardsvold was not invited, and Gerhardsen did not seek his advice. The Home Front had planned that Berg and Gerhardsen were those who should receive the King when he would return on 7 June. But Storting President Carl Joachim Hambro interfered and saw to it that also he and Nygaardsvold were allowed to say some words.

When Nygaardsvold finally was invited to the Labour Party’s central board, he stated that he had not declared himself unwilling to lead a new government. He also said he had expected the party’s leadership to be interested in hearing the Government’s assessment of the political situation.

When elected to the Storting for the last time in the autumn of 1945, Nygaardsvold was bent on being directly responsible when the Storting would discuss the Investigating Committee’s report on his Government before and during the war. The part of the report treating the London years held little criticism, while several serious accusations were raised in the part treating the Government’s work in Norway. Nygaardsvold’s reaction was to ask for impeachment and to counter the criticism in an extensive written comment.

When the Storting’s standing committee on scrutiny presented its recommendations in  1948, the terms pointed towards impeachment. However, following a Labour Party intervention the committee’s majority concluded that there was no basis for an impeachment against Nygaardsvold’s Government. This prevented the judicial assessment of the accusation that Nygaardsvold had wanted.

At the end of the Storting term in 1949 Nygaardsvold returned to Hommelvik for good. He turned down invitations to write and give lectures, and started to work on his memoirs. However, before he passed away in March 1952 he managed to fulfil merely the volume on his childhood and youth. His memoirs from the war and the years before were edited and published after his death.