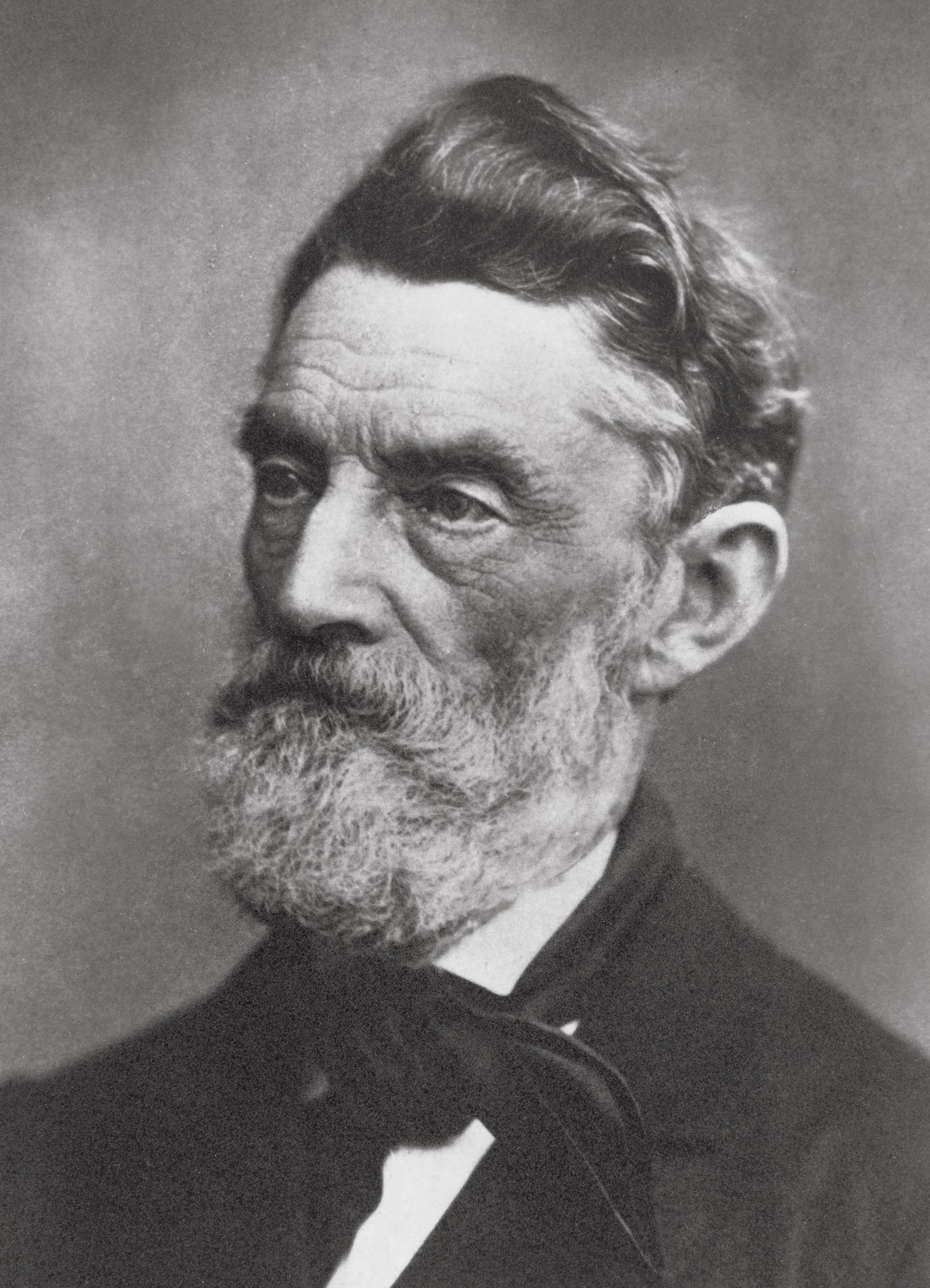 Johan Sverdrup was lawyer and politician.

Johan Sverdrup lost his mother at the age of four, while his father was tenant farmer at Jarlsberg Manor. In 1825 the family moved to Sem Agricultural College nearby.

Sverdrup passed his university qualifying examination in Christiania in 1833 and achieved his law degree in 1841. His studies took that long due to Sverdrup’s political and cultural activities. He belonged to author Henrik Wergeland’s supporters.

After two years as a clerk with the district stipendiary magistrate at Seljord, his brother-in-law Hans Plathe Nilsen, Sverdrup in 1844 opened his own legal practice in Larvik. He was authorised as a lower court lawyer in 1851 and as an appeal court lawyer in 1855.

In 1848 Sverdrup was elected member of the municipal executive board of Larvik, becoming the town’s mayor in 1849. In the autumn of 1850 he was elected member of the Storting for Larvik and Sandefjord. He was the most radical candidate, and his election was due to support from the towns’ trade, handicraft and workers unions. Also at the Storting Sverdrup stood out as a radical. Already in February 1851 he was among those proposing universal suffrage in municipal elections.

Sverdrup was re-elected to the Storting in 1854 and 1857, again for Larvik and Sandefjord. He found a partner in farmer leader Ole Gabriel Ueland. However, their relation was not without friction, as Sverdrup advocated universal radical and liberal politics above narrow class politics. A main issue for Sverdrup and Ueland was to introduce the use of juries in private prosecution. A Storting commission was appointed to study the issue, with Sverdrup and Ueland among its members. However, the Government delayed the commission’s work, and when the Storting in 1857 passed a recommendation, the Government refused sanction.

Sverdrup’s political engagement had effects on his legal practice, enflicting economic problems that he never quite managed to rid himself from. He was to some extent helped by being appointed to public posts; from 1857 as one of the Storting-appointed directors of the Norwegian Mortgage Bank and in 1860 as elected auditor-general. In late 1857 the family moved to Vestre Aker (Oslo), and in 1875 he bought the farm Nordal (Økern) in Østre Aker and settled there.

In 1859 Sverdrup and Ueland took steps to organise the opposition. This led to a closed reform association of Storting members. It turned out that the members of the association disagreed on the principally important issue of whether a majority could bind all association members in their voting in the Storting.

The Storting session of 1859-1860 was marked by national issues and issues related to the union with Sweden, as the fight to remove the post as Swedish governor-general in Christiania. Following King Carl XV’s veto in this issue, Sverdrup worked for a change of government. However, he had the Storting’s majority against him.

From the mid-1860’s Sverdrup emerged as the leading opposition politician at the Storting. The introduction of annual Storting sessions from 1869 marked a new stage in the process towards more representative democracy and parliamentary governance. The more conflict-ridden period which now started, would end in the impeachment of Christian Selmer’s Government and Sverdrup’s coming to power in 1884. Sverdrup was president of the Odelsting (the major house of the Storting) 1862-1869, Storting president 1871-1880 and 1882-1884 and chairman of several Storting commissions. From 1876 to 1878 he was editor of the opposition daily Verdens Gang.

Now came four years of political conflict, with Sverdrup leading the opposition’s attacks on Christian Selmer’s Government – which in the autumn of 1880 succeeded Frederik Stang’s Government. Sverdrup repeatedly initiated negotiations to seek a compromise, but without success. In this period Norway’s first political party was established, the Liberal Party (Venstre), in January 1884. Sverdrup was elected first chairman of the party.

After the Court of Impeachment in the winter of 1884 had ruled that Prime Minister Selmer and most of his ministers had to leave their posts, they were succeeded by a government led by Prime Minister Christian Schweigaard. However, this government left after a couple of months. After former councillor of state Ole Jacob Broch had given up his attempt to form a centre government, Sverdrup’s Liberal Government was appointed in late June 1884. This represented a decisive step in the development of parliamentary rule in Norway.

Arriving at the Prime Minister’s quarters in Kristiania, Sverdrup was lonely (his wife had passed away the previous year) and his health weak. He had no personal wish to take over as head of government; still he went for it with all his strength. However, it would soon be clear that it was not easy to lead the complex Liberal movement that had brought him to power.

Other reforms were the extension of the right to vote – passed by the Storting in 1885, the principal equality of the two forms of written Norwegian (the mainly rural ”landsmål” and “riksmål”) (1885), the appointing of a labour commission (1885), the introduction of the jury system in private prosecution cases (1887) and a law on primary education (1889).

1885 saw the start of the conflict ending in the dissolution of the union with Sweden in 1905. A triggering factor was that the Swedish parliament – the Riksdag – wanted to strengthen control over the joint foreign policy, by increasing the number of Swedish ministers in the body primarily treating foreign affairs – the ministerial council of state sessions. Since 1835 the Norwegian Prime Minister – from 1873 the Norwegian Prime Minister in Stockholm – had participated in ministerial council of state sessions. Norway now requested the same number of Norwegian as Swedish ministers in these sessions.

This was reluctantly accepted by the Swedish side, which at the same time demanded that joint union law should state that the minister of foreign affairs should be Swedish. This was accepted by the Norwegian Council of State Division in Stockholm, led by Prime Minister Ole Richter, in a joint Swedish-Norwegian council of state session in May 1885. However, Prime Minister Sverdrup, who had returned to Kristiania before the deal had been formally settled, said he had not accepted this concession.

When negotiations on the handling of foreign affairs were reopened in Kristiania in February 1886, they quickly collapsed. In June 1886 Sverdrup in the Odelsting underlined Norway’s demand for full equality in the union, and had the Storting’s support. However, Sverdrup did not press on with the issue for the time being, although more radical and nationalistic groups said Norway should now change its constitution to this effect.

Dissatisfaction was now growing in radical circles as many saw Sverdrup as moving in a conservative direction in central issues. Part of the dissatisfaction was probably also due to his authoritarian style of leadership and that he as prime minister did not want to be dominated by his party organisation. It was pointed out that in a number of issues he had taken a more moderate stand than before. This was the case both in the issue of the union with Sweden and in church and culture affairs, in particular the issue of introducing elected parish councils in the Church of Norway. To Sverdrup and the Minister of Church and Education, his nephew Jakob Sverdrup, this was a matter of increasing church democracy on the local level. The proposal fell in the Odelsting in 1887, against one vote.

This led to the demand by government ministers Sofus Arctander, Hans Rasmus Astrup and Birger Kildal that Jakob Sverdrup should resign, as they saw him as the brain behind the proposal on parish councils. After a protracted conflict the three ministers chose to tender their resignations in February 1888. Soon also Minister of Church and Education Elias Blix left the Government.

Sverdrup’s reshuffled government now became dependent on the Conservative Party, and was weakened due to its internal conflicts. On 15 June Ole Richter took his own life at the Norwegian Council of State Residence in Stockholm, shortly after having been pressed by Sverdrup to resign as Norwegian Prime Minister in Stockholm. Many thought Sverdrup carried much of the responsibility for Richter's suicide.

Sverdrup now attempted reconciliation with the Liberal Party, but it turned out to be too difficult to reach agreement on the composition of a new government. In late June Conservative leader Emil Stang presented a no-confidence motion, and in early July Sverdrup’s Government tendered its resignation, which was accepted by King Oscar II few days later.

Sverdrup continued his efforts to unite the two Liberal parties, but without success. In 1891 he was elected to the Storting for the Moderate Liberal Party in Stavanger. Due to serious illness he was not able to attend. His failing economy led to several national collections, and from 1881 he received state pension.

Johan Sverdrup died on 17 February 1892, and was given a state-paid funeral from Kristiania’s Trinity Church.