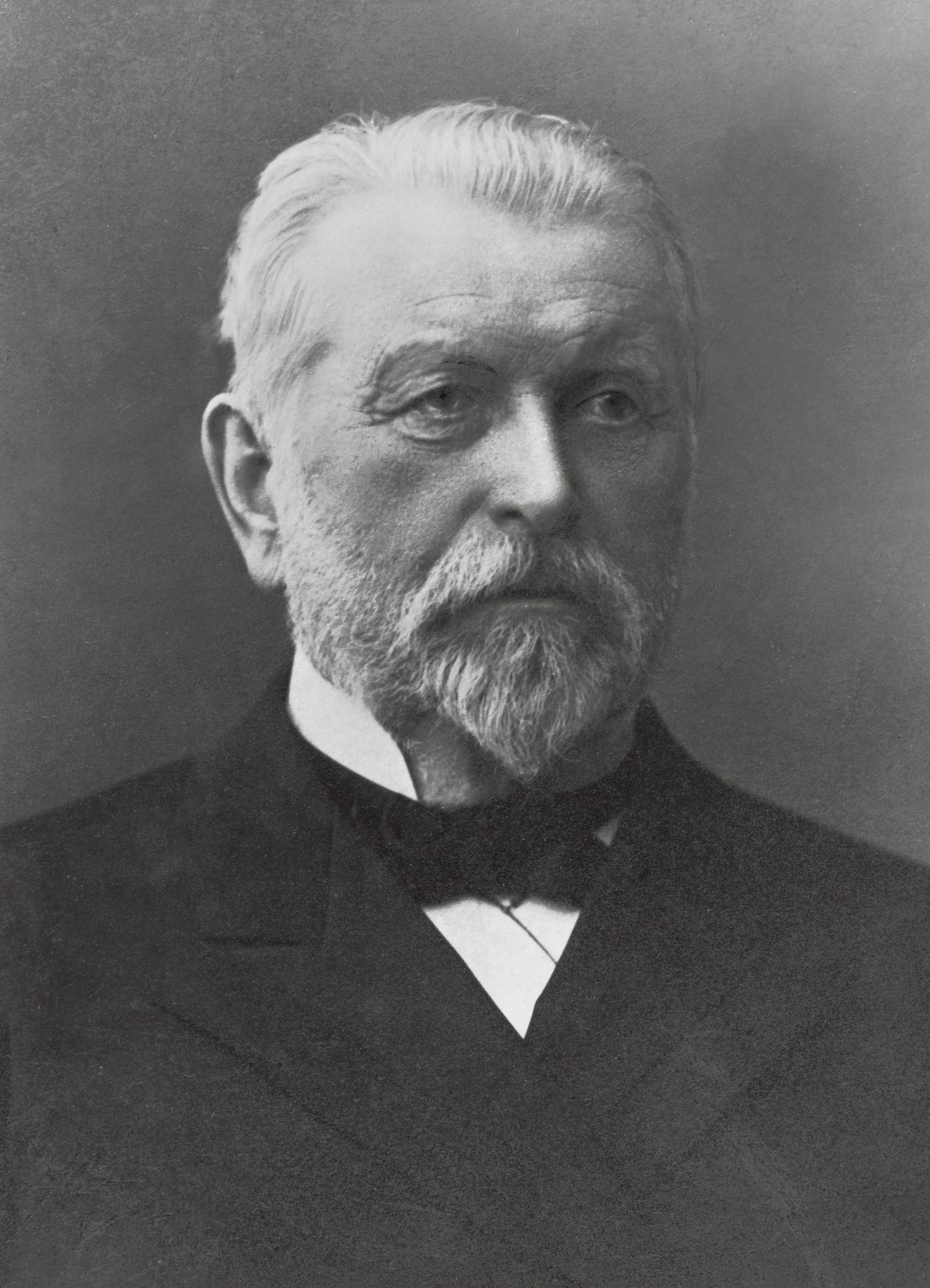 At the age of three Johannes Steen moved with his parents to Vesterålen, where his father had been appointed district stipendiary magistrate. In the autumn of 1837 he moved on to Tromsø for education, and in 1844 he was enrolled as a student at the University of Christiania. He achieved his higher degree in philology in 1848, with Norwegian and Old Norse language and literature as central disciplines.

For the next 42 years Steen combined his profession as teacher and educationist in Tromsø, Bergen and Stavanger, with his political tasks.

During his years in Bergen 1850-1855, Steen became involved in political activities. A reason for moving back to Tromsø in 1855, was his wish to find a constituency. He soon became chairman of Tromsø’s new labourers’ association, and was elected to the municipal council in 1856. Later that year he became member of the council’s executive board and was elected mayor – a post he held until 1862 and again in 1864-1865.

Steen’s ambition was national politics, and in 1859 he was elected member of the Storting for Tromsø. He was re-elected in 1862 and 1865. When he came to the Storting in October 1859, he quickly joined Johan Sverdrup’s liberal group, and was soon seen as a leading member of the opposition.

Soon after the Storting had been adjourned in 1866, Steen applied for the post as headmaster at Stavanger Latin School (since 1936 Stavanger Cathedral School). He was appointed later that year. In November 1868 Steen was elected to the Storting for Stavanger, and also became member of the executive board of the city council. He was Stavanger’s mayor from 1872 until 1883, and again in 1885 and 1890. With his democratic attitude he provoked reactions in Stavanger’s business circles.

More due to differences in temper than to political disagreement Steen now did not come to be as close to Sverdrup at the Storting as before. Issues where they would differ were the law on secondary education and plans for further development of railways. From 1871 the Storting became increasingly marked by political struggle, and in the issue of government ministers' participation in the Storting’s meetings, Steen chose a more moderate stand than Sverdrup. When the Government refused to sanction the Storting’s decision, it was Steen that united the opposition on a line aiming to remove Fredrik Stang’s Government.

In Stavanger Steen’s support for Sverdrup’s "radical policy" led to him not being re-elected to the Storting in 1873. But in 1876 he came back, and once more became president of the Odelsting (the Storting’s major house). Again his line was somewhat more moderate than Sverdrup’s, but when the Stang Government once more refused to sanction the proposal that government ministers should attend the Storting’s meetings, Steen became more impatient. In the new Storting of 1880 the liberal movement had close to two-thirds majority. But again Stang’s Government refused to sanction a new decision on the issue of government ministers' presence in the Storting’s meetings.

Steen now joined ranks with Sverdrup, and the issue of impeachment against Christian Selmer’s Government came to dominate the 1882 election campaign. At the Storting of 1883 Steen wrote the impeachment recommendation that was passed by the Storting.

The conflict ended in Johan Sverdrup forming a new government in June 1884. Steen was a possible minister, but was not appointed as King Oscar II had been disappointed at his behaviour in the impeachment proceedings. Rather, Steen now became the first Storting president in this phase to welcome government members to the Storting’s meetings.

Steen continued as the Storting’s president also in the 1886-1888 period, and now came to be a central person for the more radical part of the Liberal movement. When the Liberal Party was split on the issue of parish councils in the Church of Norway in 1887, Steen in early 1888 became leader of the group now describing themselves as the (Pure) Liberal Party. The group demanded Sverdrup’s Government to be reshuffled to include Steen and others. This did not succeed, and in the elections the following year Steen was not re-elected to the Storting. He now again became mayor of Stavanger.

Neither when the Conservative Party presented a no-confidence motion against Sverdrup’s Government in 1889, did Steen succeed in reshuffling the Government into one where his part of the Liberal movement was represented. Rather, Conservative Emil Stang formed a new government. But when this government tendered its resignation in February 1891, Steen – elected chairman of the Liberal Party the previous month  – was called to Kristiania to form the new government. He combined the post as the Prime Minister with being chief of the Ministry of Finance. Steen’s Government had an uncertain position until it obtained absolute majority in the Storting elections later that year. This made Steen resign from his headmaster post in Stavanger.

The conflict on the issue of a separate Norwegian consular service now came to dominate Norwegian politics. Steen was unyielding in his attitude that this was a purely Norwegian matter which should not be handled by other than Norwegian authorities, while union partner Sweden and the Conservative Party wanted the issue to be discussed in a joint session of the two councils of state. In June 1892 the Storting decided, against the votes of the Conservative Party and the Moderate Liberal Party,  to grant means for a separate Norwegian consular service. When King Oscar II would not sanction this, Steen’s Government tendered its resignation in late June. After the King’s unsuccessful attempt to make the Conservative Party’s Emil Stang form a new government, the compromise was to postpone the decision on the consular service issue while Steen’s Government withdrew their resignation.

When the issue surfaced again a year later, and the King continued to refuse sanctioning the Storting’s decision, Steen’s Government once more tendered its resignation. Emil Stang now agreed to form a new government, and the change took place in early May 1893. Steen was now awarded state pension and became member of the board of the Bank of Norway division in Kristiania. From 1896 he was member of the bank’s national board.

In 1894 Steen was re-elected to the Storting, from Trondheim and Levanger, and was again elected the Storting’s president. Already in February 1895 the King invited him to form a new government, provided that the Storting’s decisions on the consular service issue were dropped. Steen could not accept that.

For a period union issues now came more in the background in the political debate. At the same time the ageing Steen’s position as chairman of the Liberal Party took a more symbolic character. Still, he was a leading person in defending general suffrage for men and women in 1896, and in the struggle to remove the union emblem from the flag of Norway.

In 1897 Steen was re-elected to the Storting, now as a representative for the inland cities around Lake Mjøsa. Also this time he was elected the Storting’s president. However, as the Liberal Party now gained a two-thirds majority, a change of government was expected. In mid-February 1898 Steen’s Second Government was appointed. Steen now chose to combine the tasks as the Prime Minister with leading the less demanding Ministry of Auditing, in order to spend more energy on coordinating the Government’s work. Two years later he switched to the Ministry of the Interior, in order to prepare a new offensive on the issue of a separate Norwegian consular service. The Ministry of the Interior had recently been given a new foreign affairs department, where Director General Sigurd Ibsen was now working on a comprehensive plan for a separate Norwegian consular service.

It was now claimed that Steen himself was becoming an obstacle for a more daring union policy. He gave in to this, and in late April 1902 the 75-year old Prime Minister tendered his and his government’s resignation.

Steen spent his last years with his family at Voss. Han stayed out of politics, apart from signing the 1905 proclamation that Norway should become a republic. He died on 1 April 1906, close to 79 years old.