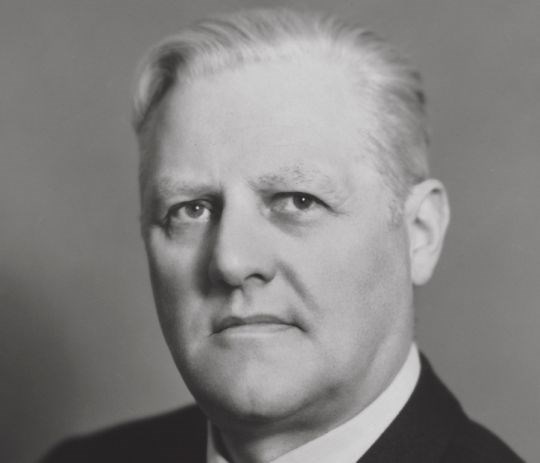 After childhood and school years in Trondhjem John Lyng in 1923 took up law studies at the University of Kristiania (Oslo). For some years he was active in the leftist student grouping Mot Dag (“At Dawn”). Upon achieving his law degree he became deputy judge in 1928, before leaving for Germany with a scholarship in 1930. His impressions of Adolf Hitler’s growing Nazi movement were deep, and gave him a dislike of totalitarian movements. Lyng became a strong supporter of democracy and moderation, while at the same time keeping his understanding for the labour movement.

After Nazi-Germany’s invasion in Norway in the spring of 1940, Lyng rapidly became involved in resistance efforts. In March 1943 he had to flee to Sweden, where he was engaged by the Norwegian legal office in Stockholm. His main responsibility came to be information on Norwegians assisting the German occupants in Norway. He established a comprehensive archive and prepared the strategy for judicial processes after the war.

In 1944 Lyng kept up this work from his office in the Norwegian Ministry of Justice in London. He also served as secretary to a committee preparing the first Storting elections after the war, under the leadership of Storting President Carl Joachim Hambro.

Upon returning to Norway after the war, Lyng in May 1945 was appointed public prosecutor in Trøndelag. In June 1945 he was elected chairman of the Conservative Party in Trondheim and was nominated for the Storting. He was elected, but was given extensive leaves of absence due to his role as prosecutor in the case against Norwegian Nazi Henry Rinnan and his gang. Lyng conducted this in a way that made him known all over the country.

At the Storting Lyng became member of the standing committee on legal affairs, and caused commotion by criticising the judicial processes for having a far too broad scope. Lyng’s advice was to punish ”the major sinners” and let the others go. In 1948 he voted to abolish capital punishment.

In 1950 Lyng was spokesman for the Storting’s treatment of emergency legislation, containing legal arrangements for war and war-like situations. He rewrote the proposal, deleted the most drastic parts and prepared the ground for a national compromise in a delicate matter.

Lyng’s major task in this period came as the Conservative Party’s main spokesman in the debate on comprehensive economic regulations, in particular in 1947. Lyng chose the constitutional approach: such legislation would transfer power from the Storting’s open forum to a state bureaucracy passing their decisions behind closed doors. Lyng’s argumentation had its effect, and the Gerhardsen Government’s ambitious regulation policy was shelved. Contributing was also international liberalisation and reactions from legal experts.

Experience from opposition years in a Storting with Labour majority made Lyng  propose to change the electoral system so that the largest party would no longer be as privileged as it had used to be. The proposal went through with a narrow majority, and was Lyng’s breakthrough as a political leader. However, in the 1953 elections he lost his Storting seat.

Lyng had now become presiding judge of Agder Court of Appeal, and had planned to leave national politics even though he continued as chairman of the Conservative Party’s programme committee. But to the liberal wing of the party he was indispensable, and in 1957 he was re-elected to the Storting – this time from the County of Akershus. Soon after he was elected leader of the Conservative Party’s parliamentary group.

Lyng’s major aim was to construct a non-socialist alliance that might bring an end to the hegemony of the Labour Party. On all levels he worked to establish contacts and confidence. In particular he developed good relations to the Liberal Party. The first round of debate on whether Norway should join the European Economic Community (EEC, EU) divided the non-socialist parties, and forced Lyng to halt his plans for non-socialist unity. But when French President Charles de Gaulle in 1963 vetoed the intended expansion of the EEC, the situation changed. Lyng could once more bring up his plans for non-socialist cooperation.

In the meantime the Labour Party had lost its Storting majority in 1961, and Einar Gerhardsen’s Third Government was now a minority government. Several issues, in particular linked to state industry, created a more tense situation between the Government and the opposition. In the summer of 1963 a parliamentary crisis was caused by an accident in the Kings Bay mine at Ny-Ålesund on Svalbard.

Lyng’ leading position on the non-socialist side was now uncontested. He kept his attacks on the Government within the constitutional field, drawing the attention to lacking follow-up of Storting decisions, breach of the Government’s duty to inform the Storting and contempt for the opposition. On 23 August 1963 Gerhardsen’s Government was forced to leave by a vote of no confidence which also had the support of the Socialist Peoples’ Party (SF). Lyng’s Government took over on 28 August, representing the Conservative Party, the Centre Party, the Liberal Party and the Christian Democratic Party. This was the first non-socialist government in Norway since Johan Ludwig Mowinckel’s Third Government 1933-1935.

Prime Minister Lyng was prepared that his government would be toppled on its inaugural address, as the Labour Party had Storting majority together with the SF. He therefore decided to present a broad policy statement that would do away with the myth that non-socialist rule would mean a step backwards in social politics. Gerhardsen responded by declaring his intention to move the policy towards the left, and on 20 September Lyng’s Government was forced to tender its resignation. The change between Lyng’s Government and Gerhardsen’s Fourth Government took place on 25 September 1963.

Lyng emphasised that his interregnum would prove to have more a powerful effect than a longer government period. He argued that the existence of a credible government alternative had now been demonstrated, that non-socialist cooperation would continue and that the country now was in a situation where governments representing various policies might alternate.

In many peoples’ view Lyng had now emerged as a statesman, enjoying great confidence on the non-socialist side. At the same time several industrial scandals led to a gradual weakening of the Labour Party’s position, and the 1965 elections saw a solid non-socialist majority in the Storting. On 12 October Gerhardsen’s Government was succeeded by Per Borten’s Coalition Government representing the Centre Party, the Conservative Party, the Liberal Party and the Christian Democratic Party.

In 1963 the other non-socialist parties had not wanted the post as prime minister, but now this had changed. Lyng might probably still have become prime minister in 1965 if he had wanted so. But he chose to focus on a task outside normal party politics, and took over as minister of foreign affairs after veteran Halvard Lange – who had held the post 1946-1963 and 1963-1965.

Lyng continued Lange’s foreign policy, based on the broad political agreement on Norway’s participation in the NATO alliance. At the same time a new attitude and new emphasis were emerging. Lyng had an open attitude to further east-west relations to promote détente. In June 1966 he became the first western minister of foreign affairs to support the idea of a pan-European security conference, but had little support. West-German Chancellor Willy Brandt became a close ally with his Ost-Politik. Lyng combined this with emphasising Norwegian and western interests in his meetings with Soviet leaders. In 1967 Lyng took the Greek military junta to court, and was actively engaged in the process which in 1973 led to fall of this dictatorship.

When the EEC issue resurged in 1966, Lyng worked determinedly to have the Government propose Norwegian membership. In this he succeeded, also in securing broad majority in the Storting. But once more the process was cut short by a French veto, in 1967.

Lyng caused international sensation when he in a speech to the UN on 4 October 1966 argued for a complete halt in the US bombing in Vietnam, in order to prepare for a negotiated settlement of the conflict. Signals had been received from North Vietnam, and a secret channel between the USA and North Vietnam was established via Norway. This caused unrest on the right wing of Norwegian politics, but even broader support on the opposite side.

On 22 May 1970 Lyng chose to resign as minister of foreign affairs. He wanted to write his memoirs, also hoping that his resignation might lead to a clarification of the Government’s attitude to the EEC. That did not happen, and ten months later Borten’s Government fell due to internal division in the EEC issue.

In 1977 Lyng was struck by cancer, dying before he was able to finish the fourth and last volume of his memoirs.