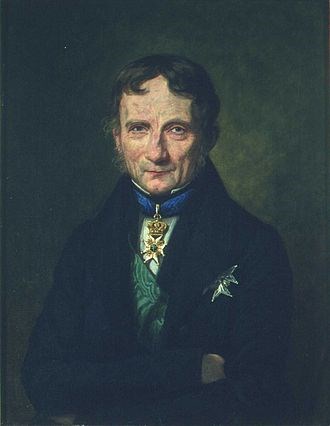 Councillor of State 8 March 1844-19 April 1848, Member of the Norwegian Council of State Division in Stockholm. Chief of the Ministry of Church and Education September 1844.

Poul Christian Holst was son of the famous ”Vicar of Røyken” Christian Holst, and became a pupil at J. L. Horn’s strict school at Strømsø (Drammen) at the age of eight. Holst’s own assessment was that this had made him timid and shy for the rest of his life. In 1797 he entered Kongsberg’s new grammar school before becoming a university student in 1792. He took up theology studies, initially at home and then at the University of Copenhagen, but switched to law and achieved his degree with excellent marks in 1798.

After some years at the central government office Rentekammeret in Copenhagen, Holst was in 1806 appointed bailiff of Akershus Castle in Christiania and of Aker and Follo. This was a demanding task in the years of conflict and distress during the Napoleonic Wars, also as he from March 1813 was acting governor of the County of Akershus.

On 16 February 1814 Holst took part in the meeting of leading men that Prince Christian Frederik, the Danish governor-general in Norway, had summoned at Eidsvold Værk, where the Prince was advised to call a national assembly. Holst himself saw his role in the meeting as having been modest and close to passive.

In March 1814 Holst was appointed member of the Intermediate Criminal Court in Christiania, which until further notice should act as Norway’s supreme court in criminal cases. In May the National Assembly at Eidsvold elected him member of its committee for finance affairs and in August 1814 he became acting chief of 1st Ministry (finance affairs), when Councillor of State Frederik Haxthausen resigned.

In early October 1814 Jørgen Vogt took over as acting chief of 1st Ministry while Holst represented the County of Akershus in the Storting’s extraordinary session on the issue of the union with Sweden.

In late November 1814 Holst was appointed state secretary (secretary to the Government) for Norway’s first government after the country had entered the union with Sweden – the First Wedel Government. He was granted leave of absence in 1817, to participate in negotiations with Denmark on the settlement of claims after the Peace Treaty of Kiel. The settlement was finalised in 1820.

The following year Holst was sent to Stockholm to negotiate with Britain on what was termed the “Bodø case”. Britain was threatening to halt its timber import from Norway unless Norway paid compensation to British sailors arrested for smuggling in Bodø. Holst was not able to stand up to the superpower’s pressure, and was forced to accept that compensation be paid to the British smugglers.

Holst described his role in life as ”the humble post of a village priest” and did not find himself at home with Swedish court etiquette. In the struggle of 17 May, Norway’s Constitution Day, he often acted as a mediator. Due to him there were no legal proceedings after a Norwegian demonstration against the celebration of 4 November (the day Norway entered the union with Sweden in 1814) in Christiania in 1827.

In 1833 Holst initiated a royal proposition that members of government should be allowed to attend the Storting’s meetings. He argued that this was a condition for a constitutional form of government. But the Storting refused. When the issue surfaced again some decades later, now initiated by the Storting, it should turn out that the opponents now were the King and his government.

In 1835 Holst achieved that the Norwegian Prime Minister, who had his base in Stockholm, should be summoned if the Swedish Government was discussing matters concerning Norway. In his time in the Ministry of Church and Education Holst had a major education commission appointed in 1839. And it should be Holst who became the last to turn down poet Henrik Wergeland’s application to become a priest in the Church of Norway.

Holst administered his post as an honest bureaucrat, never becoming a real politician. With his pragmatic approach he belonged to the days of old, and in April 1848 increasing professionalisation of government work forced him to resign. His successor as minister of church and education was Bishop Hans Riddervold.

Holst spent the next couple of years writing his memoirs, which offer valuable knowledge of Norwegian political history. On the founding day of the Royal Norwegian Order of St. Olav in 1847, Holst was one of the first three persons to receive the order’s grand cross.